The purpose of the project was to study specific pathways along which viruses can quickly spread between cells. Viruses may infect susceptible cells from the outside, binding to their surface receptors and gradually penetrating into their interior. Inside the cell, these viral molecules fall apart and release genetic material (DNA or RNA), which is then replicated, followed by the synthesis of viral proteins; new viral molecules are then formed, which can travel out and infect more cells. However, some viruses are also able to penetrate neighbouring cells without being released into the extracellular environment. To do so, they use sites of direct contact between adjacent cells or various intercellular connections. This direct transmission pathway allows them to spread faster and avoid contact with antibodies and immune cells. For some enveloped viruses (e.g. HIV, measles, human leukaemia virus), cell-to-cell spread has been shown to account for perhaps more than 60% of all infections. Targeting the cell-to-cell transmission mechanism is thus being hailed as a promise of important new treatments, especially for neurological disorders. 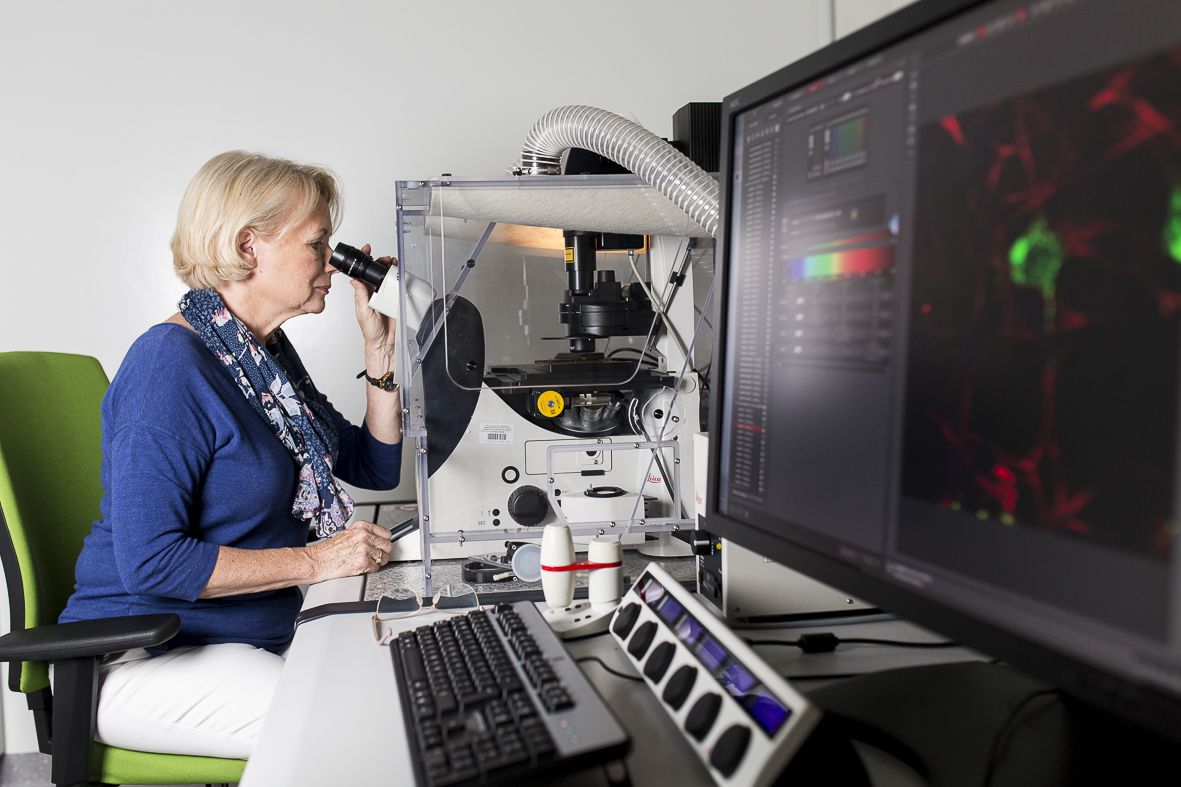 Our project focuses primarily on herpesviruses, which persist in the host in latent form for a lifetime after primary infection and may reactivate multiple times, which means they must particularly good at evading the host’s immune response (at primary infection). Around 80% of the human population is chronically infected with at least two viruses from the family, such as the herpes virus (HSV-1) or the cytomegalovirus (CMV), although in most people the infection is latent and asymptomatic. Herpesvirus strains with an impaired ability to spread via the cell-to-cell pathway are not pathogenic and can be used as vaccines against animal herpesviruses. However, no similar strains have been obtained for human herpesviruses. Another research model we used was the hepatitis C virus (HCV), one of the most dangerous human pathogens, which is very difficult to cultivate in a lab and mutates quickly, which has stalled any efforts to create an effective vaccine thus far. Our knowledge of the process by which the HCV enters host cells has increased, but it is still far from fully understood. It is only recently that it was discovered that the virus is also able to spread directly from cell to cell without being released into the extracellular environment.

Our methodology involves producing virus mutants, modifying genes involved in cell-to-cell transmission, studying their purified products, and analysing their mutual interactions and important functional domains. In an important experiment, we were able to directly track the movements of viruses in live cells, using fluorescent-labelled, “glowing” specimens constructed in our labs. This allowed us to show, for instance, that herpesviruses can travel between distant cells via long and thin projections, known as tunnelling nanotubes, which serve as specialised bridges and were only identified in recent years. What is more, we managed to demonstrate that the presence of the virus stimulates the formation of such intercellular connections and one of the viral kinases is involved in the process. This was an important discovery because, until then, this pathway had only been observed for HIV and some RNA viruses. The findings of our study were published in the Journal of Virology (DOI: 10.1128/JVI.00090-18).

We also identified a number of cell proteins that interact directly with glycoprotein gE, an envelope protein of an animal herpesvirus (BHV-1), which is essential for its rapid transmission, and developed new methods for measuring the speed of cell-to-cell spread. Our findings indicate that this pathway is frequently used in the course of natural infection. 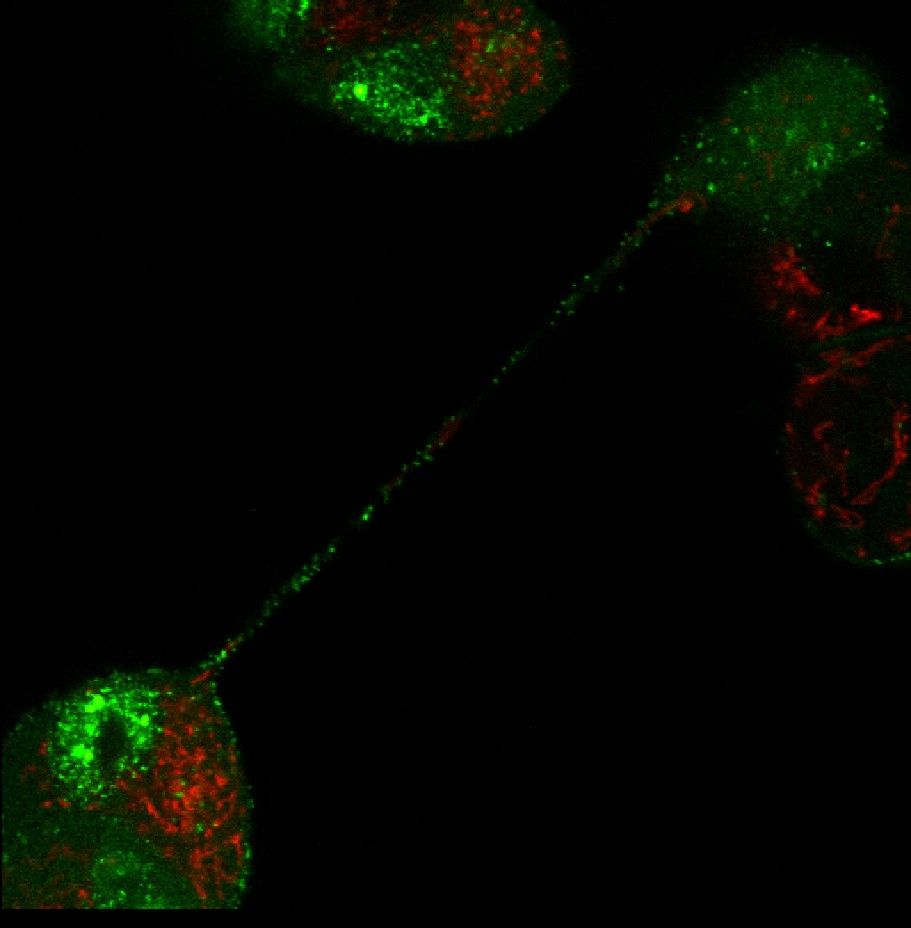 Intercellular transport of fluorescent labelled particles of BHV-1 virus through tunnelling nanotubes. Green marker: GFP, fused to the capsid; red marker: mitochondria We are particularly interested in the still poorly-studied issue of how viruses are transported between cells of various lineages (e.g. epithelial cells that line the infected organs) and blood cells. Studying the molecular mechanisms that allow viruses to quickly spread between cells may be crucial for developing new methods to control viral infections. As a follow-up to this study, we are now planning to look into the cell-to-cell spread mechanisms of coronaviruses. To date, very few preliminary reports exist on this transmission pathway for viruses from this family. Considering how effective the SARS-CoV2 virus is at infecting a variety of organs (not only the lungs, but also the intestines, kidneys and heart), it may be assumed to rely on the same transmission mechanism. This is the subject of our next NCN project, which will be carried out under PRELUDIUM BIS. The project aims to identify the transport pathways of coronaviruses between nearby and distant cells, initially based on a murine model of MHV, with a focus on the transmission of the virus between different types of infected and non-infected cells via intercellular connections. Until now, we have managed to adapt our lab to meet the security standards for working with SARS-CoV2, which will allow us to experiment with human coronaviruses. Our research experience, as well as the methodology we developed in our MAESTRO project, are now being put to use in our research on the SARS-CoV2 virus.

She heads the Department of Molecular Biology of Viruses at the Intercollegiate Faculty of Biotechnology UG-MUG. She is a graduate of the University of Gdansk. Initially, her research focused on the molecular biology of bacteriophages, which was the subject of her PhD dissertation at the Faculty of Biology of the University of Gdańsk and her post-doc fellowship at the University of San Francisco, California. It was during her second post-doc, when she worked on the translation mechanism of the poliovirus at the University of Utah (Salt Lake City, USA), that she first developed an interest in human viruses. Upon her return to Poland, she teamed up with her husband, Professor Bogusław Szewczyk, to create a state-of-the-art molecular virology lab at the University of Gdańsk, which now studies viruses such as alpha-herpesviruses, the hepatitis C virus, the flu virus and a variety of animal pathogens. The lab also uses other viruses, such as insect baculoviruses, retroviruses and adenoviruses to express foreign genes and construct virus vectors. The research group cooperates with many foreign research centres, including the Institute for Animal Health in the Netherlands and the MRC-University of Glasgow Centre for Virus Research. Prof. Bieńkowska-Szewczyk has served as a principal investigator under many research grants and headed a partner group in five international projects funded from successive EU Framework Programs. She has also repeatedly served as an expert in EC programs. In 2011, she was invited to host the prestigious International Herpeswirus Workshop, which was held in Gdańsk, and in 2023, she will host the European Congress of Virology, the largest virology conference in Europe. She has authored c. 56 publications in international journals such as the Journal of Virology, Virology, PNAS, Oncogene, Vaccine, Euro Surveill. Her initiative led to the creation of the International Centre for Cancer Vaccine Science at the University of Gdańsk within the framework of the International Research Agenda programme run by the Foundation for Polish Science. During the coronavirus pandemic, Prof. Bieńkowska-Szewczyk became actively involved in organising SARS-CoV2 diagnostic programmes and conducted research on the genetic sequencing of the virus. She was a member of the Advisory Team on COVID-19 Prevention, Mitigation and Response. She actively reached out to the public to increase the general level of knowledge about the virus, track the pandemic and promote Covid-19 vaccines.  A jury of journalists recognised her media activities with the title of Pomeranian Woman of 2021. 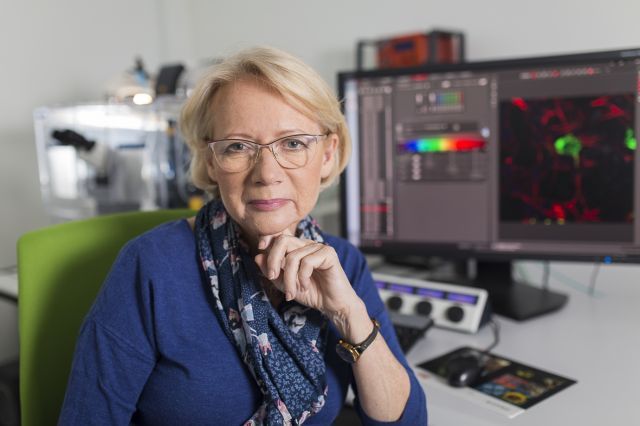