Heart disease remains as one of the most frequent lifestyle diseases and its treatment represents one of the greatest challenges for contemporary medicine. Myocardial infarction, which weakens myocardial contractility and causes a number of complications, is one of the most common causes of sickness and death. Modern tissue engineering tools, which aim to grow tissue substitutes with the use of cells and substrates, is an extremely promising direction in regenerative medicine. A well-constructed substrate, usually made up of polymers, should biodegrade along with the proliferation of cells. 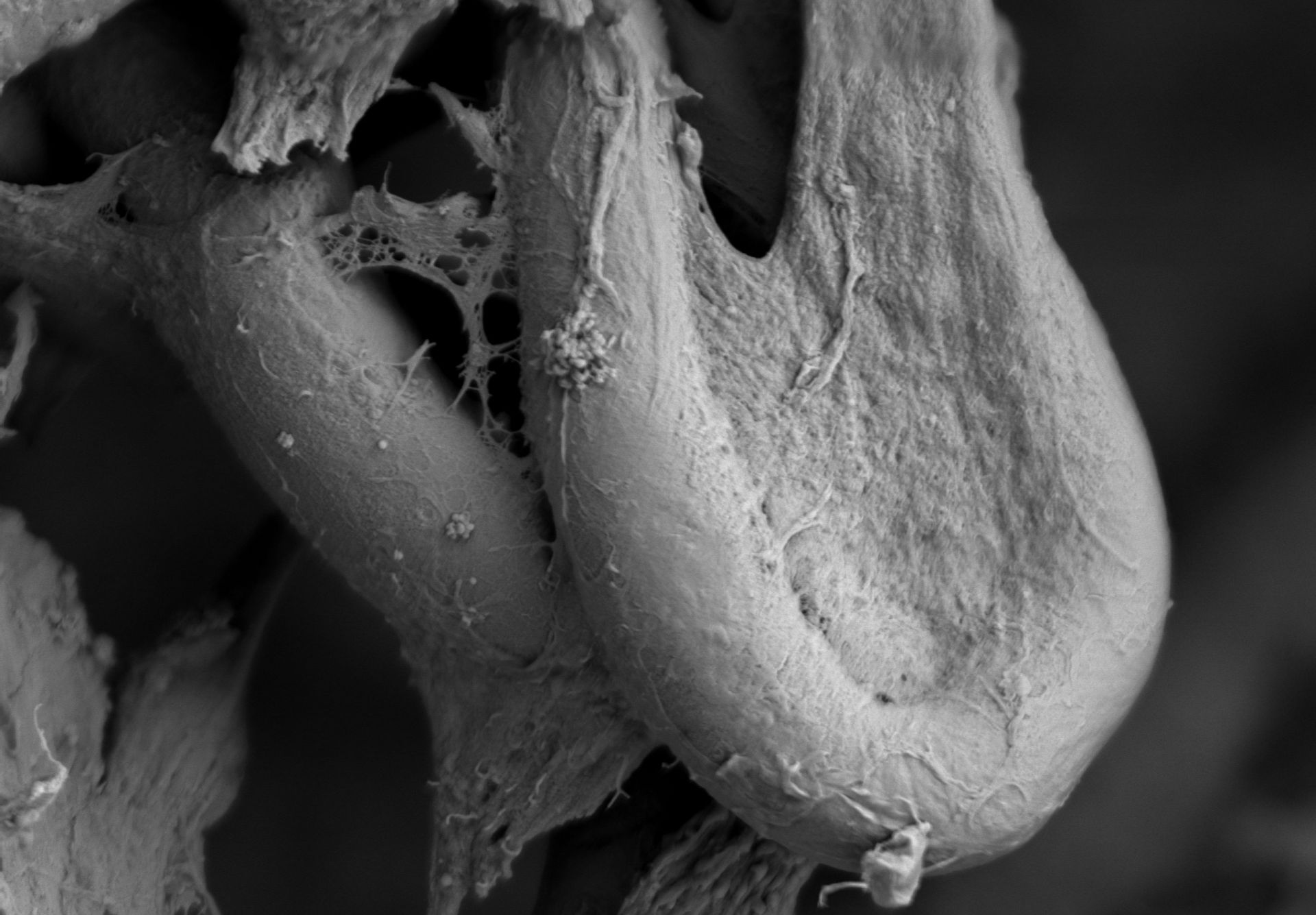 SEM microphotograph showing L929 cells grown for 144 hours on fibres obtained using the “wet” electrospinning method The purpose of my research was to create biodegradable polymer structures with a specific, coiled shape that would closely mimic the structure of muscle fibres and myocardial contractility to serve as a cellular substrate. A key element of the project involved the use of non-toxic monomers and enzymes as natural catalysts to obtain new biodegradable polymers based on polybutylene succinate (PBS). Equally important, we developed a new modification of the electrospinning process, which was not originally envisioned in the proposal, i.e. the so-called “wet” electrospinning, to produce structures with a pre-defined architecture that mimics the structure of coiled fibres. This represents a major step in the development of new, cutting-edge methods for obtaining functional materials. My team collaborated with several renowned international centres, such as the Weizmann Institute of Sciences (IL), University of Akron (USA) and Rutgers University – New Jersey Center for Biomaterials (USA). Staff and PhD students involved in the project used their state-of-the-art infrastructure to carry out detailed physical, chemical, structural, thermal, mechanical and biological tests on the new materials. We also managed to significantly expand our knowledge in better understanding how new polymers interact with biological structures. 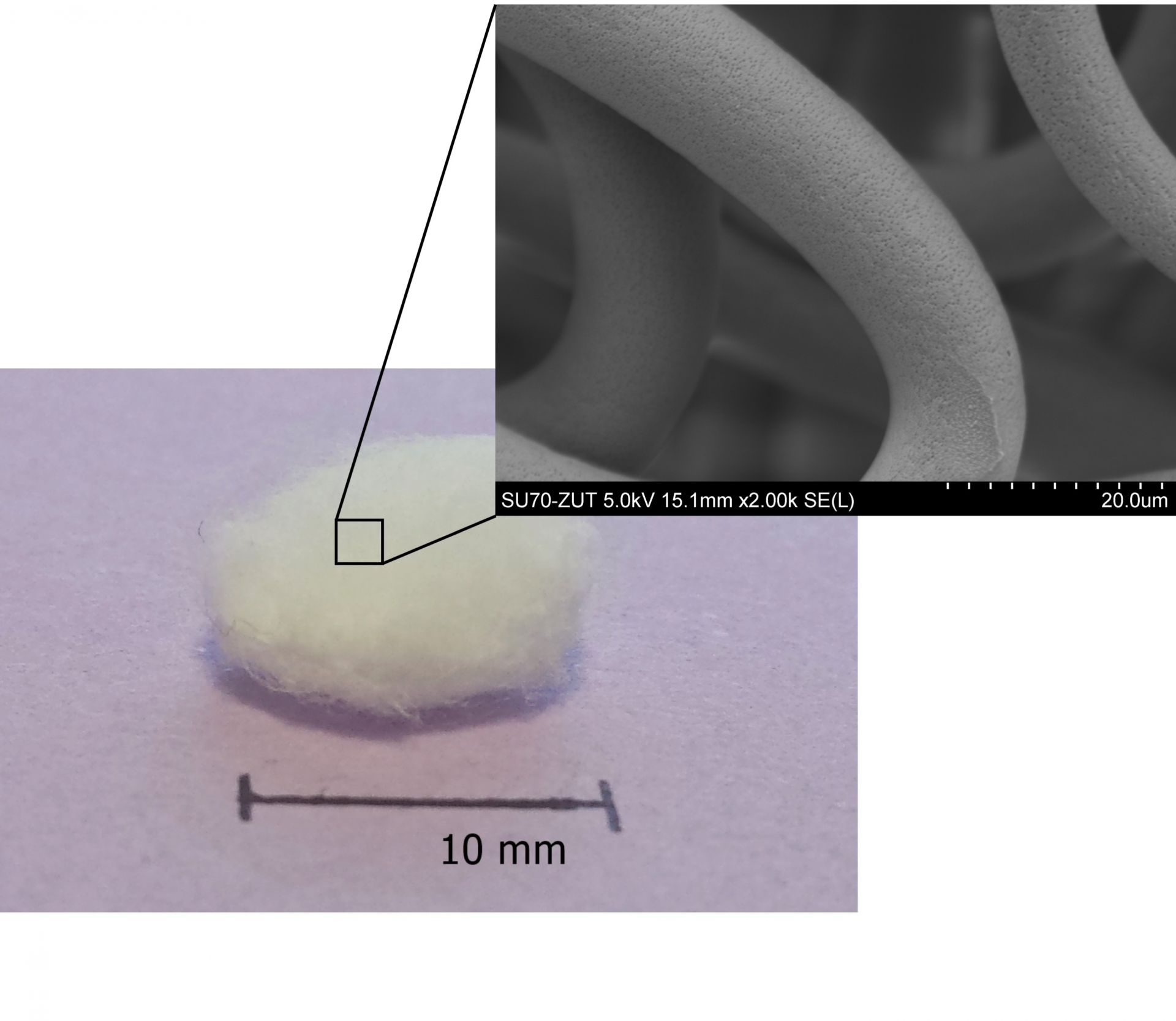 Macrophotograph of twisted and multidimensional polymer fibres synthesised with enzymes as catalysts; magnified SEM microphotograph of fibre porosity This multidisciplinary team collaboration has been translated into a series of articles published in reputable journals, such as “Langmuir”, “ACS Sustainable Chemistry & Engineering”, “Materials Science and Engineering: C”, “RSC Advances”, “Polymers”, as well as papers presented at prestigious international conferences, including the World Biomaterials Congress in Montreal, the European Society for Biomaterials Conference in Athens, the Bio-Inspired Materials in Potsdam, the World Forum on Advanced Materials POLYCHAR in Naples, and many others.

Thanks to the new knowledge and the results I obtained in my project, I was able to secure a prestigious fellowship awarded by the Polish-American Fulbright Commission, the STEM Impact Award 2019, to carry out research into “green” polymers synthesised with the use of enzyme catalysts at Ohio State University (USA). The biodegradable polymers developed under the HARMONIA 6 project are now being studied within the framework of a new project I coordinate under Horizon 2020 H2020-MSCA-RISE, in cooperation with academic and industry partners from four European countries and the US.

A graduate of the West Pomeranian University of Technology (MSc – 1991, PhD – 1996), she earned her habilitation at the Warsaw University of Technology (2004) and completed a postdoctoral fellowship at the Hamburg-Harburg University of Technology and the University of Bayreuth (2000-2003) in Germany. She has won a Royal Society fellowship at Imperial College London, UK (2005), and a fellowship at Ohio State University, US, awarded by the Polish-American Fulbright Commission (2019). She is also a winner of the “West Pomeranian Nobel Prize” (2016), member of various scientific societies, author of more than 130 publications in JCR journals, and holder of 10 patents, including 2 granted by the United States Patent and Trademark Office (USPTO). She has supervised 10 PhD dissertations and more than 70 MSc and MEng theses. She is a member of the International Research Council of the Institute of Experimental Medicine of the Czech Academy of Science. 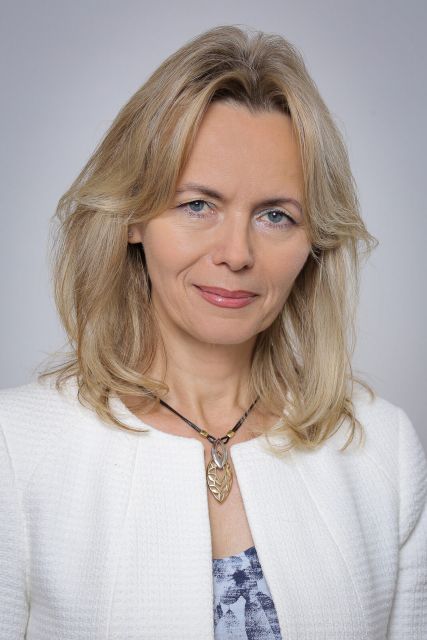