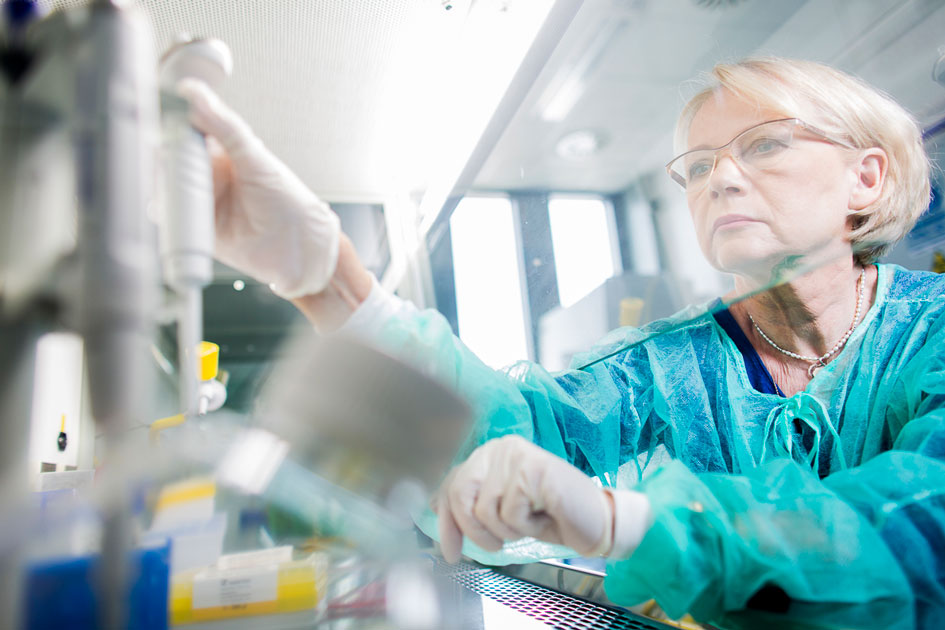 Viruses are the most widespread microorganisms on earth. They can multiply only inside living cells and may infect all living organisms: humans, animals, plants, as well as other microorganisms, such as bacteria. Not unlike software viruses, which are inactive outside the computer, biological viruses cannot be propagated unless they enter a host cell, and have therefore developed surprisingly varied strategies of their exploitation.

An infection begins when a virus binds to an appropriate receptor on the cell surface and penetrates into the cell. Once its genetic material and proteins have been copied, new virus particles are produced, which then have to be released and transferred to the next host cells. The virus entry for outside (“free entry”) process usually consists of several stages, during which protein components of the virus envelope interact with several cell receptors and undergo a conformational change. However, many viruses may also take a shorter, more direct route, entering the adjacent cells through various intercellular connections without being released to the outside environment of the host cell. This direct method, known as cell-to-cell spread, allows the virus to spread very quickly . It also effectively protects viruses against the defence response of the immune system. The cell-to-cell pathway is much less studied than the “free entry” transmission route. The purpose of our research project is thus to improve the understanding of cell-to-cell spread, which, as suggested by recent studies, is the preferred transmission pathway for many viruses, e.g. HIV. 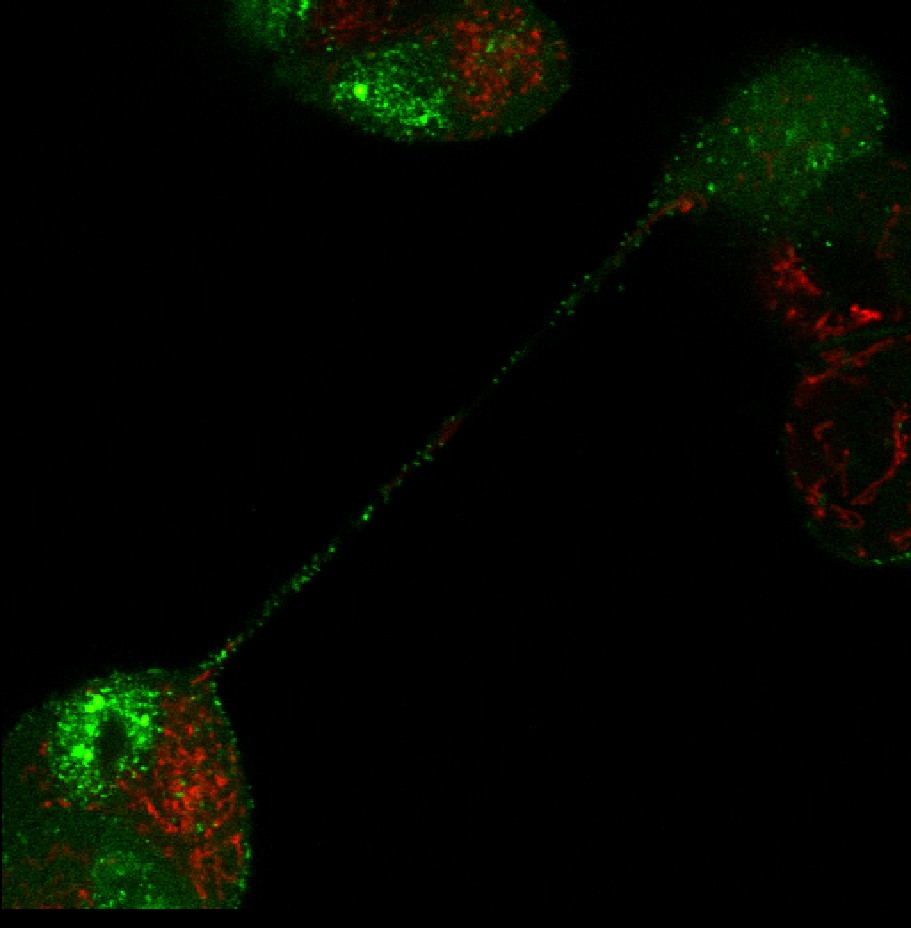 Our objective is to characterize viral genes and proteins involved in fast transmission and understand their interaction with cell factors. We focus on herpesviruses, which stay in the host organism for a lifetime in latent ( inactive ) form and can be frequently reactivated. For these viruses the ability to evade the immune response (unleashed during the primary infection) is essential for survival. Nearly 80% of the human population are chronically infected with at least two herpesviruses, such as human herpesvirus 1 (HSV-1) and cytomegalovirus (CMV), even though the infection is usually latent and asymptomatic. Herpesvirus strains with an impaired ability to spread via the cell-to-cell pathway are not pathogenic and can be used as vaccines against animal herpesviruses. However, no such vaccines for human herpesviruses exist. Another research model is the hepatitis C virus (HCV), one of the most dangerous human pathogens. No vaccine against it has yet been developed so far due to the HCV extreme genetic variability and very difficult laboratory cultivation. HCV mostly infects hepatocytes, but can also be found in other cells, e.g. in lymphocytes. Although the HCV entry process into host cells has been investigated in depth, it is still not fully understood. It was only recently discovered that HCV is also able to spread via the cell-to-cell transmission pathway.

Our methodology involves the generation of virus mutants, modification of genes engaged in cell-to-cell spread, and analysis of their purified products, as well as the analysis of their mutual interactions and important functional domains. The construction of fluorescent-labelled mutants enabled us to use the confocal microscopy for direct observations of virus movements between living cells. Thanks to this very successful experimental approach, herpesviruses were shown to be able to travel between distant cells through long and thin projections known as tunnelling nanotubes. We also managed to identify for our model herpesvirus ( animal virus BHV-1) some of the cell proteins that interact directly with the glycoprotein gE, the envelope protein essential for fast virus spread inside the infected organism. We developed new quantitative methods for the evaluation of the speed of cell-to-cell spread, and our studies have shown that it is a preferred transmission BHV-1 pathway in natural infections. We are particularly interested in the examination of virus transmission between different types of cells (e.g. the epithelial cells that line the infected organs) and blood cells . A better understanding of the molecular mechanisms involved in direct viral transmission may prove crucial for the development of improved methods of controlling infections caused by herpesviruses and the hepatitis C virus. 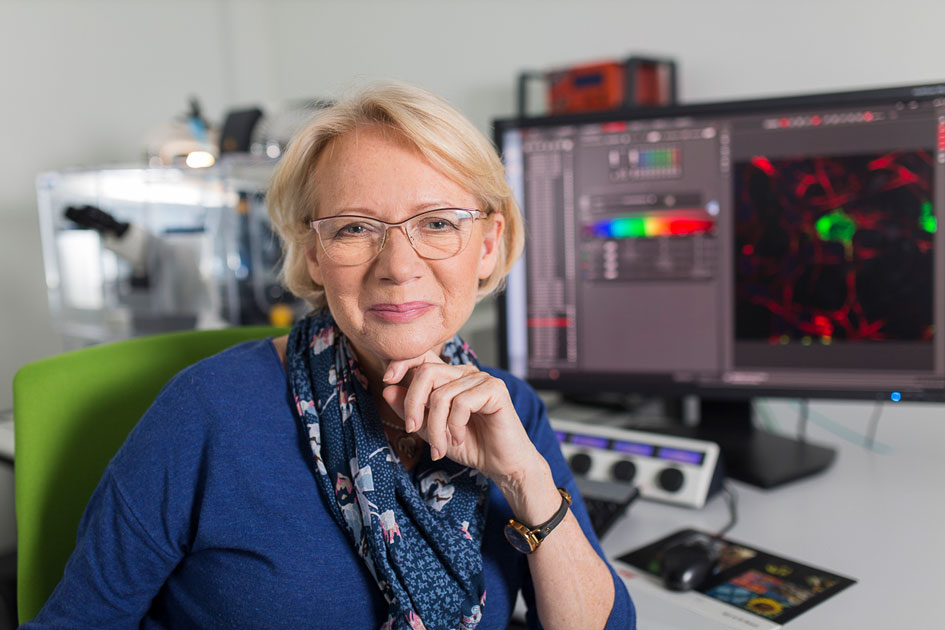 Head of the Laboratory of Virus Molecular Biology at the Intercollegiate Faculty of Biotechnology of the University of Gdańsk and the Medical University of Gdańsk. After graduation from the University of Gdańsk, she studied the molecular biology of bacteriophages, which was the subject of her PhD dissertation at the Faculty of Biology at the University of Gdańsk and postdoc fellowship at the University of San Francisco, California. It was during her second postdoc programme, when she worked on the translation mechanism of the poliovirus at the University of Utah (Salt Lake City, USA), that she first became interested in human viruses. After returning to Poland, she teamed up with her husband, Professor Bogusław Szewczyk, to create a modern molecular virology lab at the University of Gdańsk, intended for the study of viruses such as alpha-herpesviruses, the hepatitis C virus, the influenza virus, and a variety of animal pathogens. The lab also uses other viruses, such as insect baculoviruses, retroviruses, and adenoviruses, to express foreign genes and construct virus vectors. The research team cooperates with many foreign centres, such as the Institute for Animal Health in the Netherlands and the MRC-University of Glasgow Center for Virus Research. Professor Bieńkowska-Szewczyk has coordinated many research grants and led partner teams in five international research projects funded from the sources of successive EU Framework Programmes. She has served as an expert in European Commission programmes. In 2011, she was appointed as a host of the prestigious International Herpesvirus Workshop, which took place in Gdańsk. She has authored c. 50 publications published in international journals such as Journal of Virology, Virology, PNAS, Oncogene, Vaccine. Currently, she is also working with the International Centre for Cancer Vaccine Science, established on her initiative at the University of Gdańsk within the framework of the International Research Agenda’s programme of the Foundation for Polish Science.