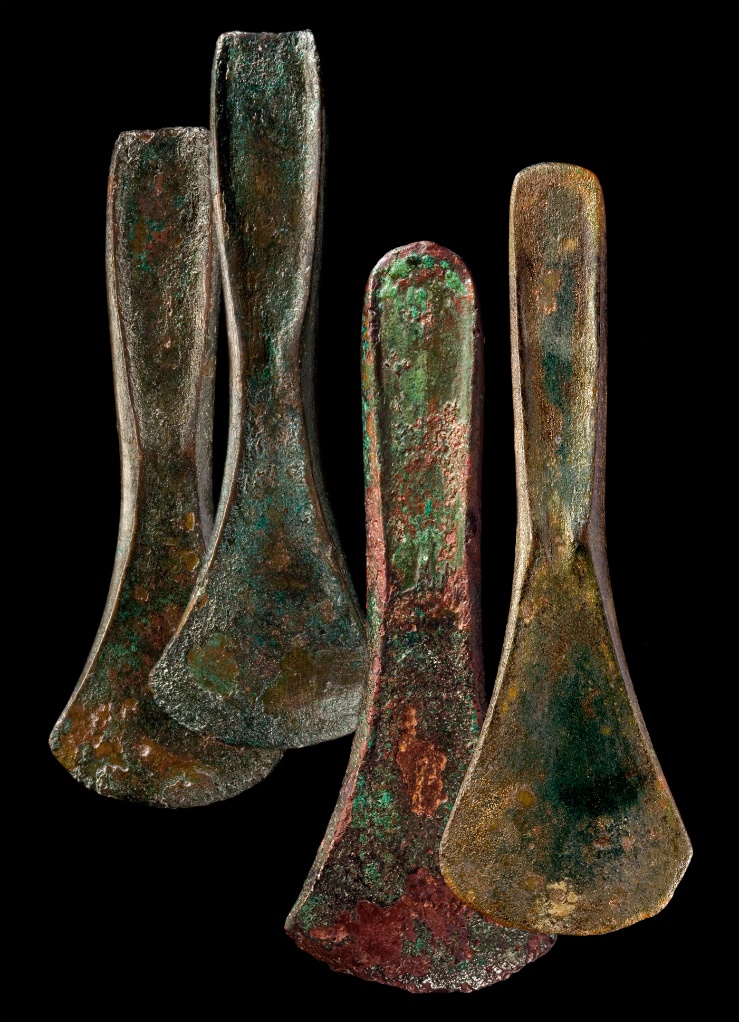 Exactly 4 thousand years ago, so ca. 2000 BC, the picture of our continent began to change dramatically. The change that took place did not only affect existing technology but society as a whole. Resources such as stone and copper, previously dominating the existing material range, were being replaced by a completely new substance – bronze, which allowed the creation of more useful tools and weapons. Since bronze is composed of copper and tin which rarely appear in the same ores, in order to acquire this precious metal, it became necessary for people to establish long-distance connections to mining areas. Today we still say that travelling broadens the mind. Undoubtedly this proverb has its origins somewhere around 2000 BC.

Travellers would not only transport copper and tin but other metals (silver, gold, lead) and rare resources (amber, ivory, semiprecious gemstones) as well. Together with people and resources, travelling included the transmission of ideas and innovations. The acquisition of bronze and the metals necessary for its production required societies living away from ore deposits to shape and maintain exchange networks; this resulted in new economic, cultural and ritual behaviors. Within just a few generations, the existing Europe “shrunk”: the geographic and cultural distances between particular regions of the continent was reduced as a result of the constantly changing and more extensive exchange networks. Within them, particular communities and parts of Central Europe were playing out different roles. Some of them, by exploiting locally available resources and strategic locations as well as benefiting from the possibilities arising from the ever-growing exchange and cultural contact, developed into key hubs. However, simultaneously more and more clear inequalities began to appear between particular regions. Nevertheless, the most important were societal changes, including the emergence of elites and an internally visible hierarchy. Elites were consequently using material culture to construct their superior societal position and they really excelled at it. 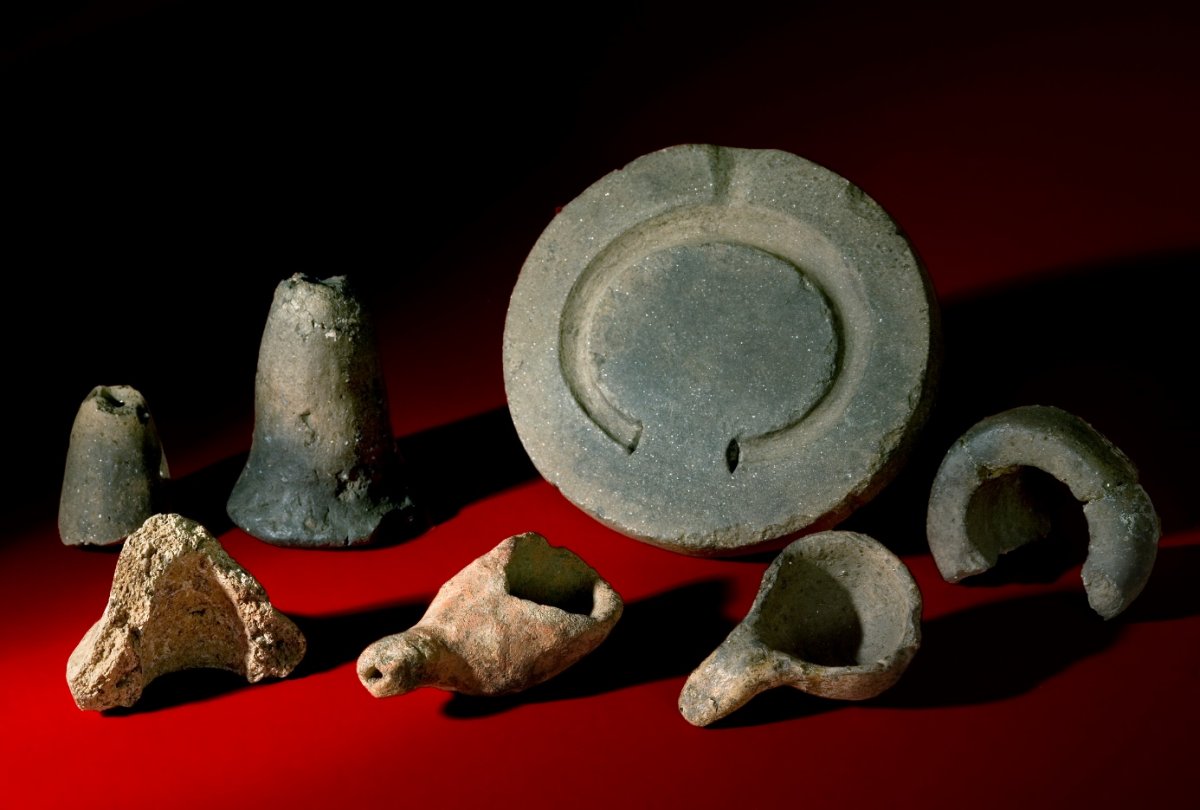 One of the best examples of such transformations is in the vicinity of Kościan in Greater Poland. An Early Bronze Age settlement is located there and along with its neighboring surroundings, from 1999 to 2008, was examined by an interdisciplinary research conducted by an international Polish-German scientific team from Poznan and Kiel. Excavations in the area resulted in 7 monographs and over 100 scientific articles. The acquired database allowed one to formulate new research questions and to outline new directions in Bruszczewo settlement studies and more broadly – the whole microregion, including the “princely graves” cemetery in Łęki Małe. An attempt at answering such questions will be the “The Late Neolithic and Early Bronze Age in the Southwestern Baltic area (2500-1500 BC). Why did Bruszczewo-Łęki Małe political structures develop?” project – a joint initiative of the Adam Mickiewicz University in Poznan and the Christian-Albrechts-Universität in Kiel, awarded funding under the BEETHOVEN 1 funding opportunity. 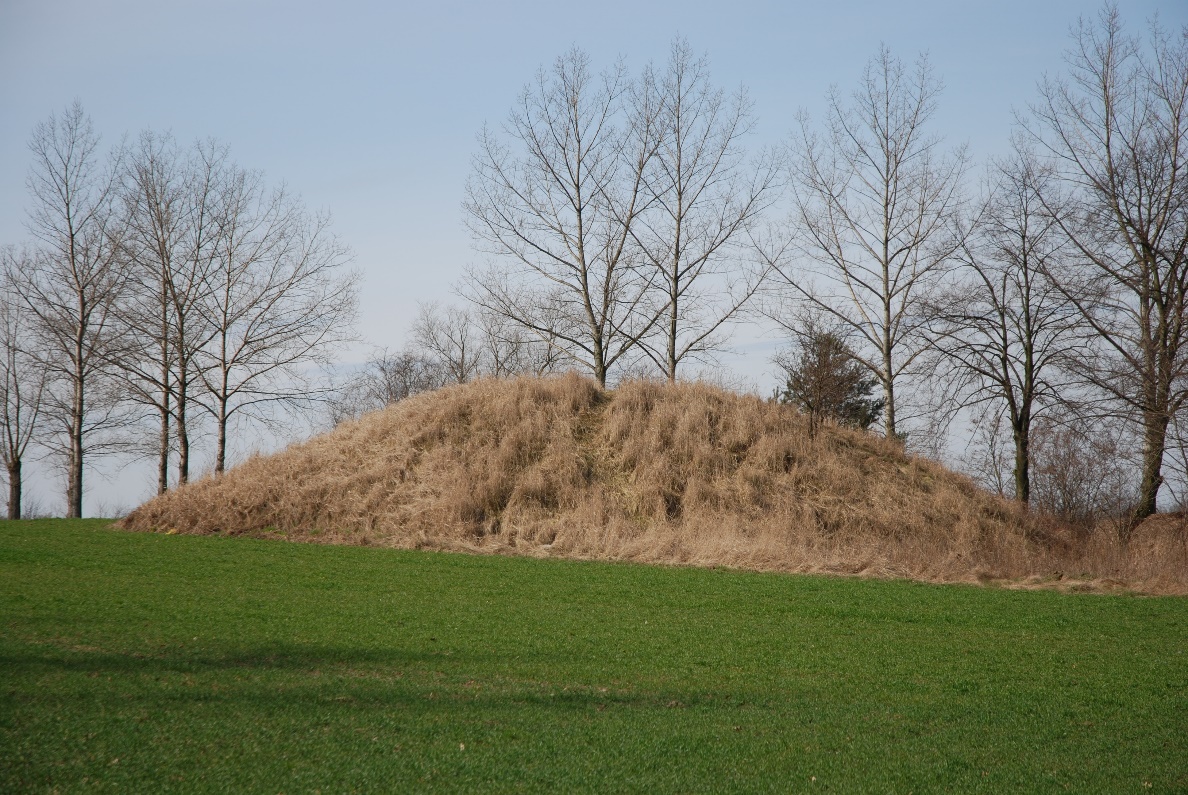 The aim of the project is to study and present the origins and characteristics of the Bruszczewo-Łęki Małe structures in the broader context of the Southwestern Baltic region. The spatial scope includes regions ranging from Holstein through to Greater Poland and Kujawy. This area, during the interstage of the Neolithic and Bronze Age (2500-1500 BC), was characterised by a similar pace of cultural transformations, mostly affected by the following phenomena: Single Grave culture, Bell Beakers, the so-called Dagger Period and Únětice culture. When it comes to Bruszczewo-Łęki Małe structures, they are regarded as small, spatially limited concentrations of particular activity types of the Únětice communities. The initial hypothesis regarding these structures was proto-state units which existed along main exchange routes (“trail communities”); these blossomed in Europe around 2000 BC. As such, the aim of the project is to display, on the basis of a dynamically perceived environment, interactions between different communities rooted in the Late Neolithic and Early Bronze Age traditions, resulting in the development of some of the oldest elite communities. An additional goal is to explore the extent to which these processes were specific for the Southwestern Baltic area, and how they were related to the broader transformations of a Pan-European character.

The archaeological research of the project has two spatial ranges. The first one covers the local surrounding of the Kościan group, especially the Łęki Małe cemetery, where a set of interdisciplinary methods will be applied for archival finds, along with a broad programme of field surveys and test trenches in the immediate vicinity of the burial ground. This stage will emphasise an archaeological and palaeoenvironmental approach. The second level of inquiry will cover larger spatial units in order to provide an insight into the whole Southwestern Baltic area. A wide variety of scientific analyses will be applied, including radiocarbon dating, metal analyses, petrography, textile imprint analysis, a DNA research, and lipid analyses, which will simultaneously contribute to a few modules. 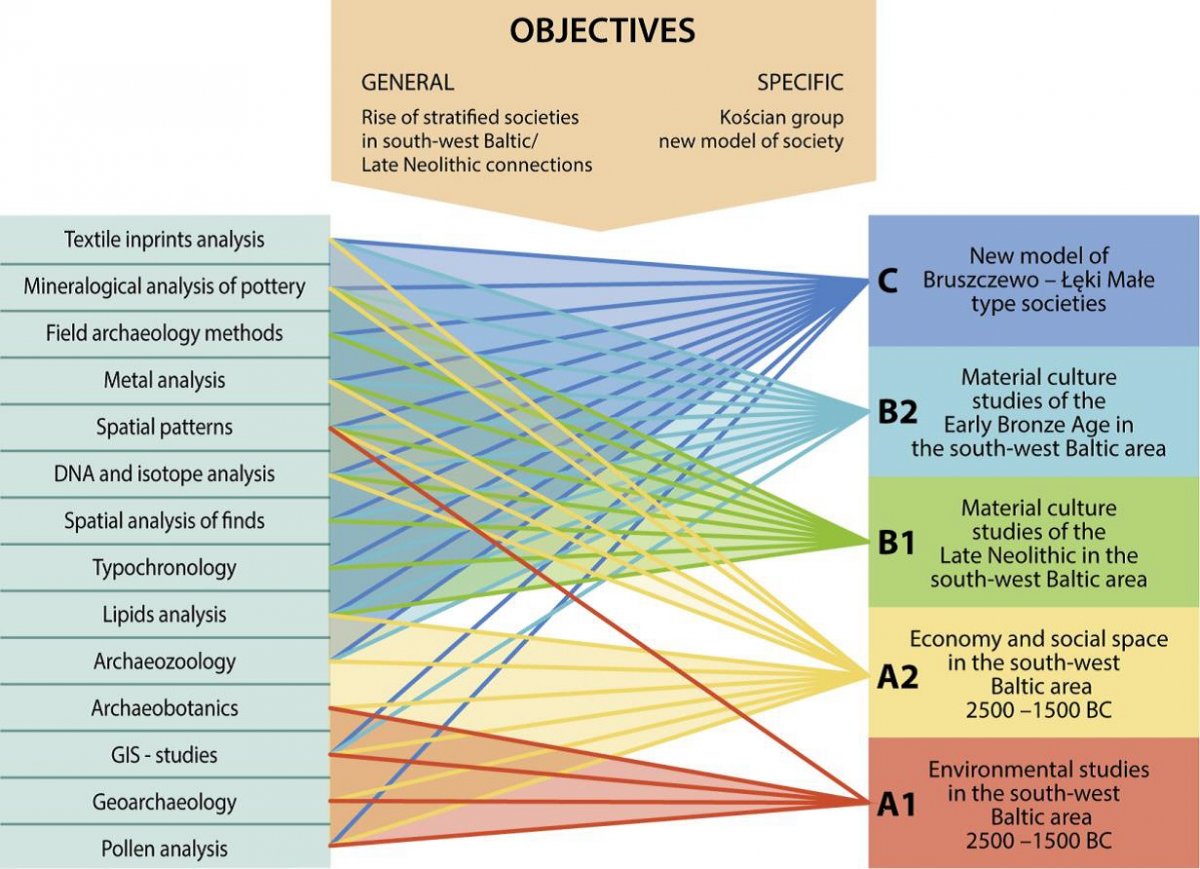 The realisation of the project will provide a new model of cultural transformations in the Southwestern Baltic area during the interstage of the Late Neolithic and Early Bronze Age. This approach will contribute by combining environmental factors with the development of complex societal structures of the Bruszczewo-Łęki Małe type. The achieved model will be multi-dimensional in character. Aside from its temporal and spatial scope, it will include socio-political dynamics – the degree of participation of particular regional/local communities in the process of developing the internal hierarchy. The project’s completion will contribute to the state of knowledge on the interstage of the Late Neolithic and Bronze Age in the lowland regions of the Southwestern Baltic area, equaling those achieved for the surrounding areas (southern Scandinavia and the loess terrains of Central Europe). The anticipated results will display to the fullest extent the unique character of the cultural phenomena in the Southwestern Baltic zone during this particular part of prehistory. 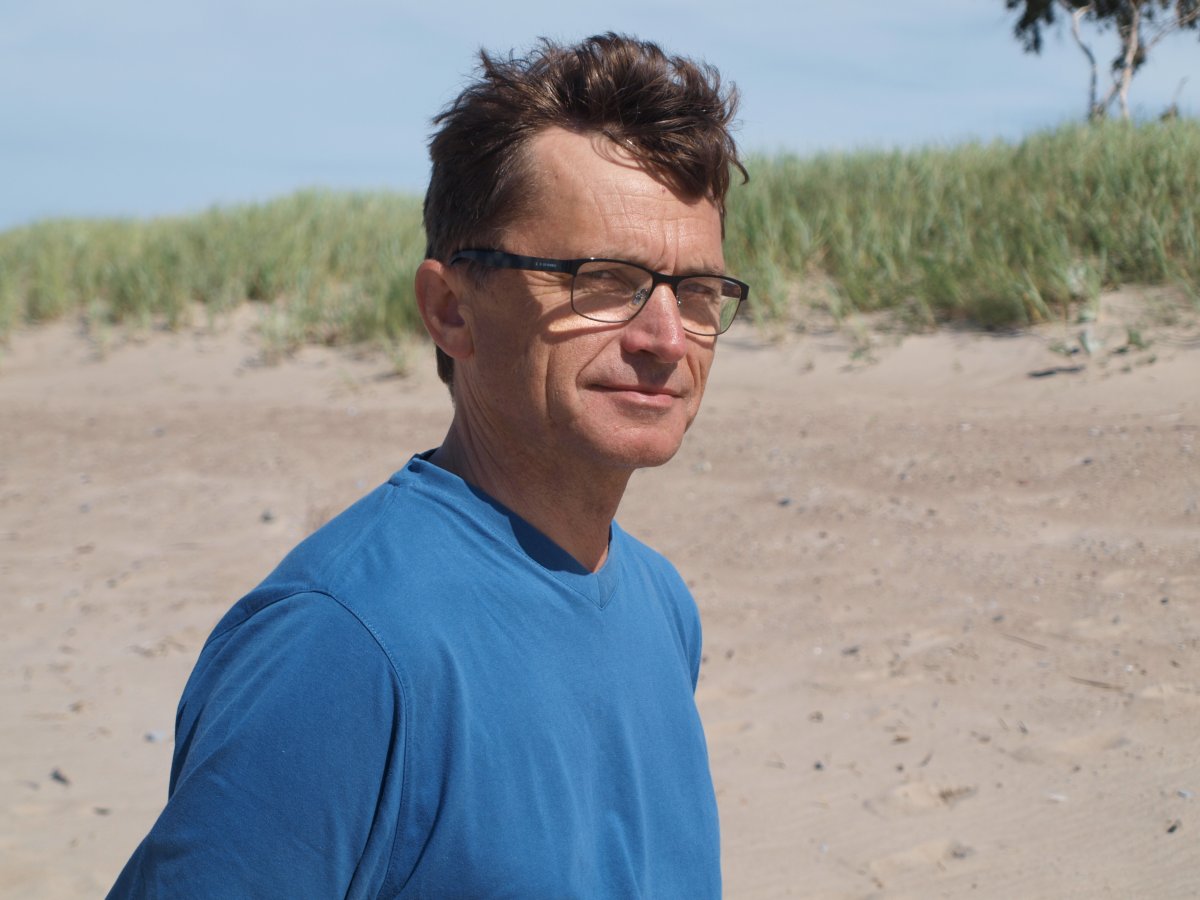 Janusz Czebreszuk, Professor Ordinarius of Archeology at the Adam Mickiewicz University in Poznan. Currently head of the Bronze Age Mediterranean Archaeology Laboratory at the Institute of Prehistory and Director of the Centre for Research on the Beginnings of European Civilisation. He specializes in the historical problems of Europe during the third and second Millennium BC. He has studied the turn of the Neolithic and Bronze Age to the north of the Carpathians, the far-reaching cultural relations binding the population of Central Europe from the Carpathian Basin and the zone of the Aegean and issues of social change during the third and second Millennium BC. An important direction of his research is also the question of the application of non-invasive methodology of field research in archeology (especially the geophysical prospecting method). Additionally he investigates issues related to the importance of amber in the prehistory of Europe. He is the author of approx. 200 scientific papers, including 8 monographs and 17 editorial volumes. His publications were printed in Belarus, Belgium, Croatia, France, Greece, The Netherlands, Lithuania, Latvia, Norway, Russia, Serbia, the USA, Great Britain and Italy. 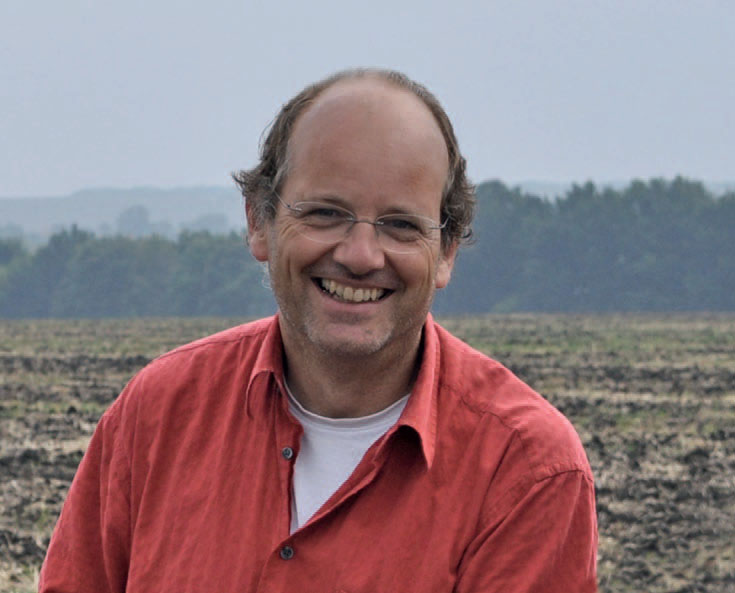 Johannes Müller is professor (C4) for Prehistoric Archaeology (Prehistory) and director of the Institute for Pre- and Protohistoric Archaeology at Kiel University since December 2004. He studied in Freiburg and Edinburgh, and obtained his Master's degree and doctorate in Freiburg. After completing a DAI (Deutsches Archäologisches Institut) travel grant, he became academic assistant at Freie Universität Berlin, where he obtained his habilitation, whereupon he held teaching positions in both Freiburg and Cologne. In 2000, Johannes Müller was appointed Professor (C3) for Pre- and Protohistoric Archaeology in Bamberg and later became head of Bamberg's Institute for Archaeology and Cultural Heritage. Johannes Müller is initiator and spokesman of the graduate school "Human Development in Landscapes" (DFG-Initiative of Excellence) and coordinator of the DFG's priority program “Early Monumentality and Social Differentiation”. Field research is being conducted in i.a. Bosnia, Poland, Germany and Ukraine. Excavation projects range from megalithic tombs, Neolithic and Bronze Age settlements to Eastern European settlement mounds and Ukrainian mega-sites.