My research is focused in the Kondoa region of central Tanzania. The rock art from the area is mainly known through the work of Mary Leakey, who, together with her husband Louis, introduced the Irangian hill paintings, which have been a UNESCO World Heritage Site since 2006, into the scientific discourse. 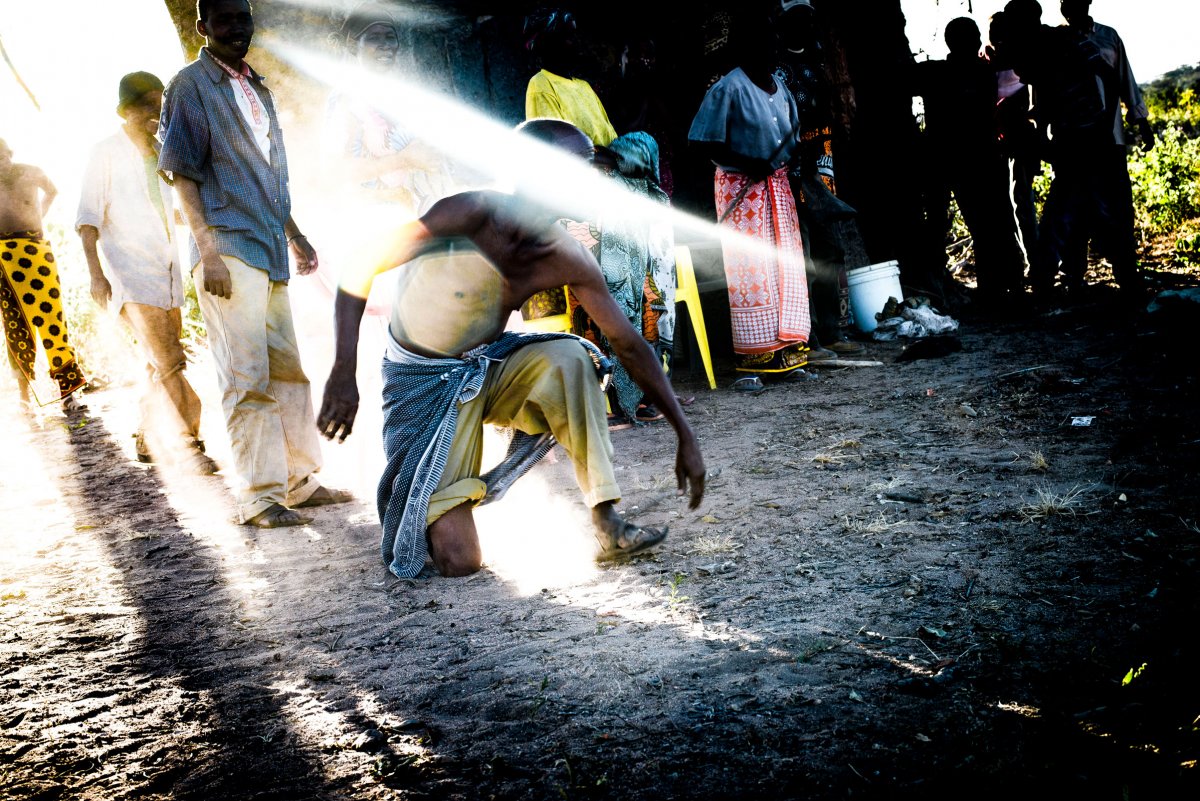 I consider my most important achievement to be the documentation of 52 previously unknown to researchers sites with paintings in the Swaga Swaga reserve area, where only a few sites were previously suspected. For the scientific world, these were the most numerous discoveries of sites with rock art in Tanzania since Mary Leakey's research in the 1950s. It should also be noted that I have so far surveyed about 30% of the entire reserve area, which leads me to believe that the number of shelters with paintings there is much higher. The work has proved that the particularly high density of sites is not an exclusive characteristic of the UNESCO protected area. Thus, in order to have a complete picture of rock art from the central Tanzania area, sites from a much larger area than previously assumed must be included. Only such an activity will lead to the best possible understanding of the rock art from central Tanzania.

Research at Swaga Swaga has also led to the documentation of a site that appears to be of particular importance. Ama'hee 4 contains more than 100 images taken during several phases of the shelter's use. Significant for this site is the occurrence of the so-called trio – the image of three figures whose arrangement of hands corresponds to the representation of the trio from Kolo – a site located about 50 km from Amak'hee 4 in the UNESCO zone . What is particularly intriguing is that the figures in Amak'hee 4 have heads stylized to look like buffalo heads, the first example of this type documented in Tanzanian rock art. 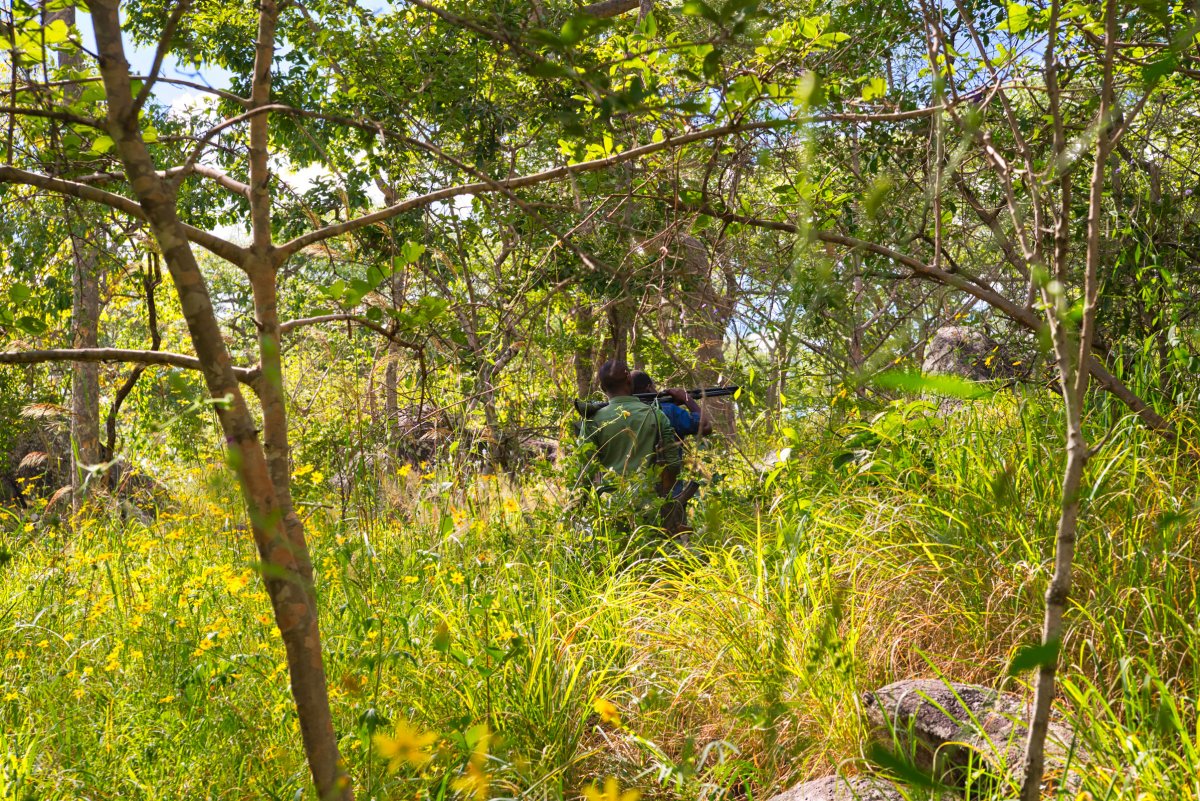 My research shows that a significant role in the selection of a particular rock shelter as a site for the making of rock art was played by the view that stretched out from it. That is why, at each documented site, in addition to professional photographic documentation, I also make spherical panoramas (360º). Thus, by means of digitisation, the rock shelter is preserved as a whole, consisting of the paintings, the rock surface, the type of shelter and the landscape.

In order to best understand rock paintings and the purpose of making them, I try to look at them from a broader perspective. Therefore, in my research, I learn, among other things, the significance of the motif of the shelter itself and the colours in contemporary Sandawe religion. Understanding these aspects allows one to better understand the reason why specific sites were chosen for the making of rock art and why specific dyes were used. An important aspect is the documentation of the simbó ritual, still practised today by the Sandawe, the descendants of the creators of most of the paintings from central Tanzania. It involves entering altered states of consciousness and contact with ancestors. A better understanding of this issue allows us to explore the hypothesis of a trance-like basis for some rock artworks.

The scientific activities related to Sandawe's rock art and cultural heritage will be progressively continued and the scope of research questions will be expanded as the project develops. Working with local researchers and the Rock Art Conservation Centre, steps will also be taken to include the Swaga Swaga area in the UNESCO zone, as well as to establish the Sandawe Cultural Centre. 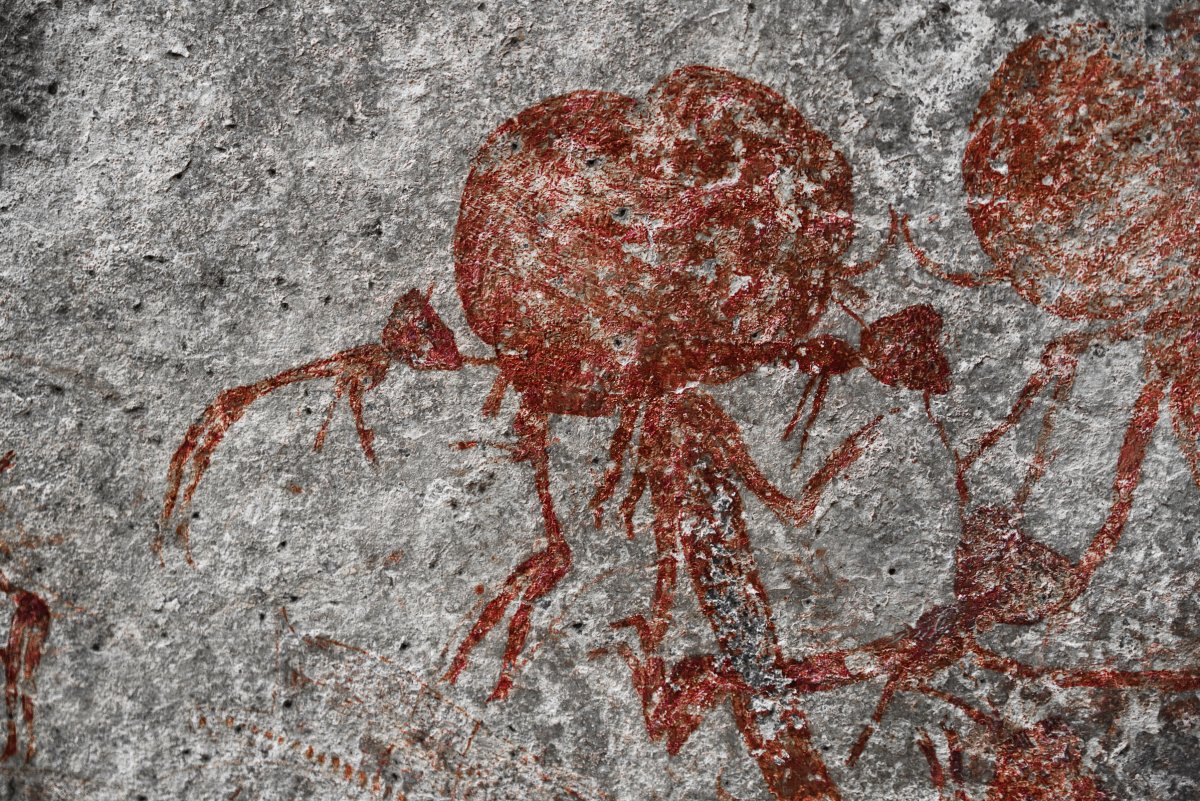 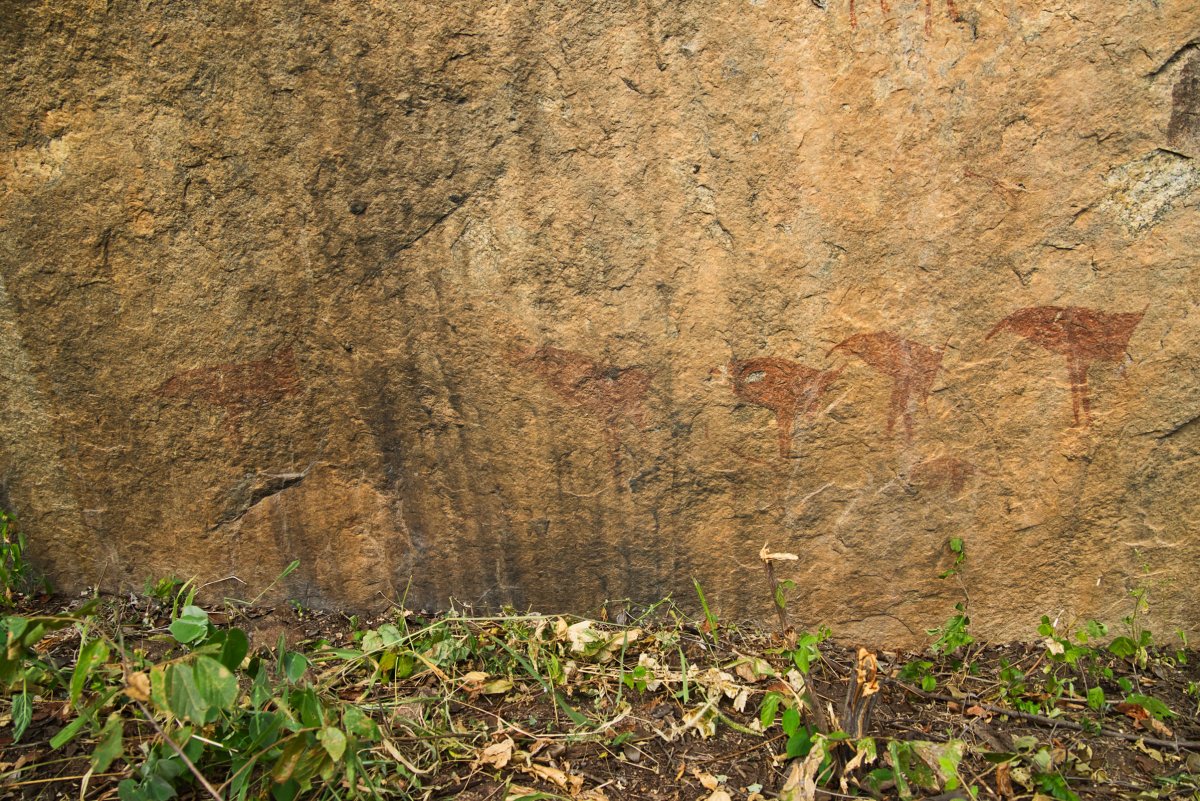 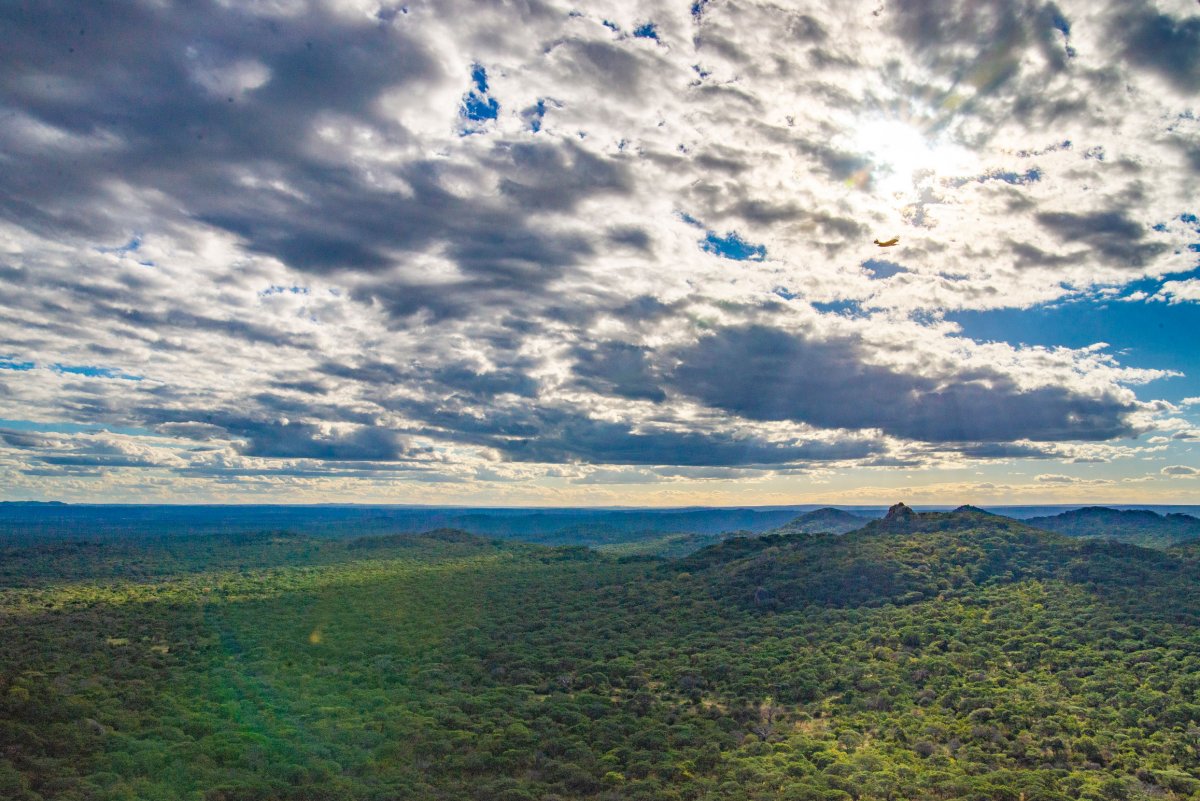 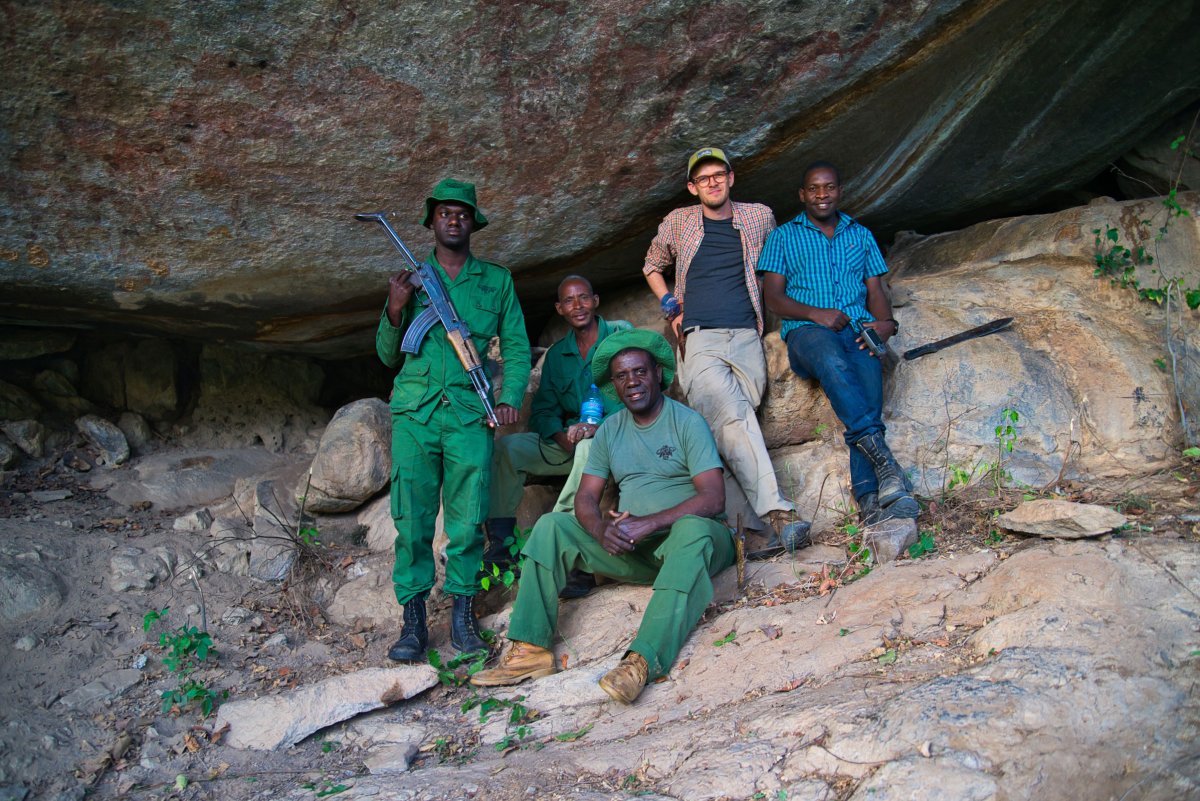 PhD student at the Institute of Religious Studies of the Jagiellonian University in Krakow. Principal Investigator for the ETIUDA 8 call on rock art and its relation to the traditional religion of the Sandawe community in central Tanzania. His main research interests are archaeology/anthropology of religion. Author of publications on the above issues and speaker at numerous scientific conferences at home and abroad. He is a laureate of, among others, the “Diamond Grant” programme of the Ministry of Science and Higher Education, a scholarship of the Minister of Science and Higher Education for outstanding early stage researchers, a grant of the Explorers Club and a special distinction awarded by the Jury of Benedict the Pole Award