The project entitled "Johann Christoph Liska's forgotten artworks. The conservator's examination of the Baroque paintings" was conducted between 2016 and 2017 at the Institute of Art History of the University of Wrocław. Its primary objective was to study paintings attributed to Johann Christoph Liska (c. 1650–1712). This outstanding Silesian painter learned painting at the workshop of his stepfather, Michael Leopold Willmann, and continued his education in Italy, where he stayed for several years. Upon his return, he worked in what is now the Czech Republic and Silesia, mainly on commissions from the Catholic Church. After Willmann's death, he took over his workshop at the monastery in Lubiąż and completed his unfinished commissions. Even though Liska is now recognized as a remarkable painter, no monograph and no systematic catalogue of his works are available. This research project has been an important step toward a better understanding of the painter and his oeuvre.

The project focused on seven paintings, selected from different stages of Liska's oeuvre, most of which are either completely unknown or considered mediocre copies of works that have not survived. Four paintings (St Joseph, St Mary of Egypt, St Charles Borromeo and Lamentation of Christ) come from the Czech territory and were commissioned by the Czech monastic circles at the turn of the 17th and the 18th centuries. Three Silesian paintings (Lamentation of Christ, Finding of the Holy Cross and Angel) date back to 1708-1712, the period when Liska was in charge of Willmann's workshop. The first step in the project was to carry out art historical research into the works of art and their history from the moment of creation until the present day. Subsequently, conservators from Kraków (Marcin Ciba) and Prague (Denisa Cirmaciová) used infrared, ultraviolet and X-ray radiation to analyse the chemical composition and the layer structure of the paintings. 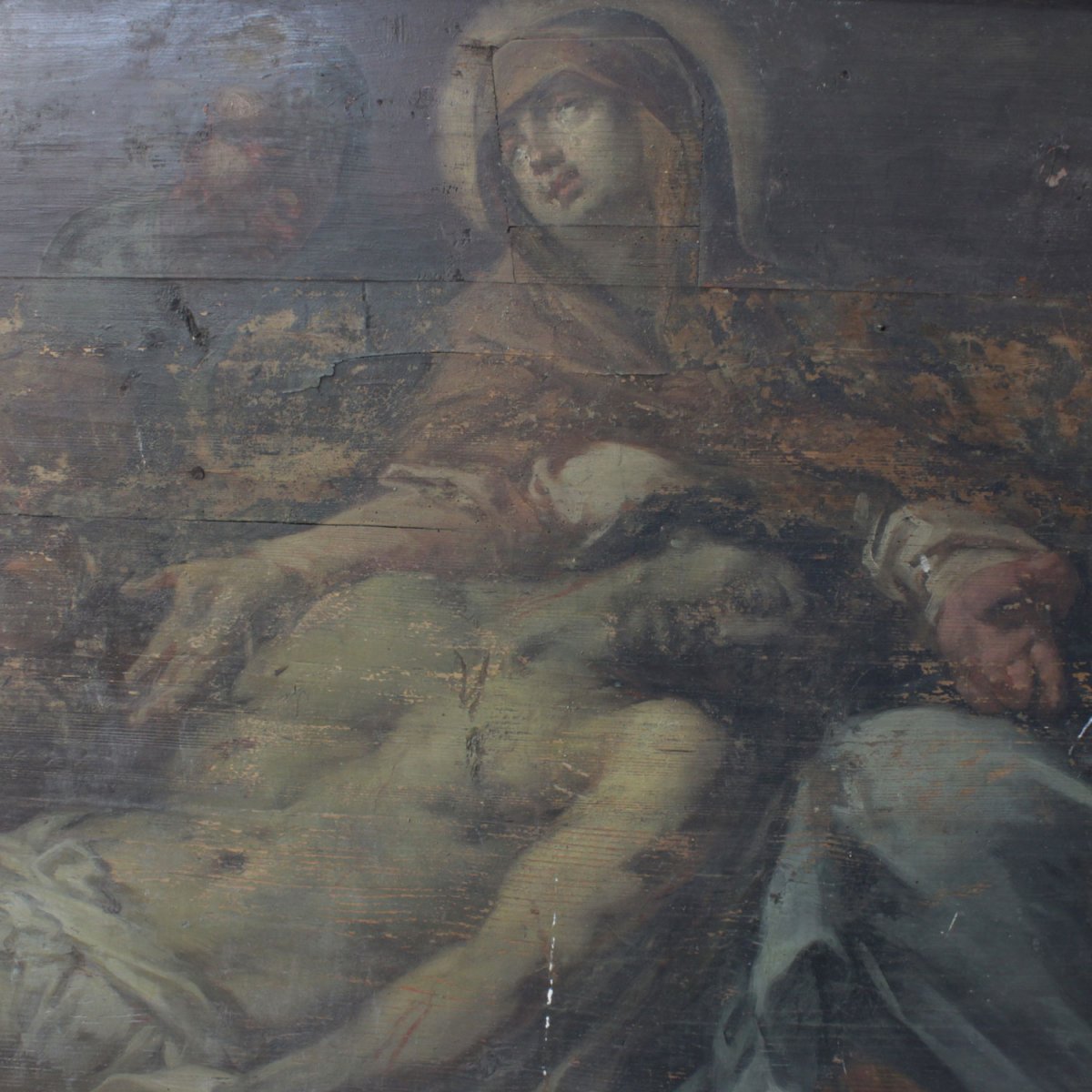 2. J. C. Lischka, Lamentation of Christ, oil on panel, c. 1706, Church of St Martin in Tursko. Detail of the clasp linking the old and the new panel, photo by Denisa Cirmaciová

This international cooperation allowed the most important features of Liska's painting technique to be described and his authorship of most of the analysed artworks to be verified. The findings confirmed that the works are similar in terms of the layering of paint and preparation of the underpainting. The differences in the choice of pigments among paintings may mean that the painter worked in two separate workshops: one in Silesia, and one in Bohemia. Particularly interesting among the analysed paintings is the Lamentation of Christ from the Church of St Martin in Tursko near Prague. A radical restoration that involved the replacement of one of the four panels that formed the underpainting is a fascinating example of the changes that the work underwent after its creation. Importantly, the research project enabled us to identify a major difference between the painting techniques of Liska and his master Willmann. None of the analysed paintings by Lischka showed any traces of preparatory drawing, which is always found on the canvases of the Lubiąż master. It seems that using infrared light to analyse paintings for the presence of sketches could become the most objective tool for distinguishing the works of Willmann from those of his stepson.

Our findings are an important contribution to what is known as the "technical art history" current in contemporary research. The interdisciplinary nature of the project allowed the results to be brought up for discussion among art historians and conservators from Poland and the Czech Republic, in an important step toward a more effective protection of our shared cultural heritage. The findings were presented at an international conference in Kutna Hora in November 2017 and published in Czech (Sborník z konference "Arte-fakt”) and English (Wiadomości Konserwatorskie). In addition, thanks to the project, a decision was taken to ensure the conservation of Angel from Henryków, and safeguard the deteriorated Lamentation of Christ from Tursko. 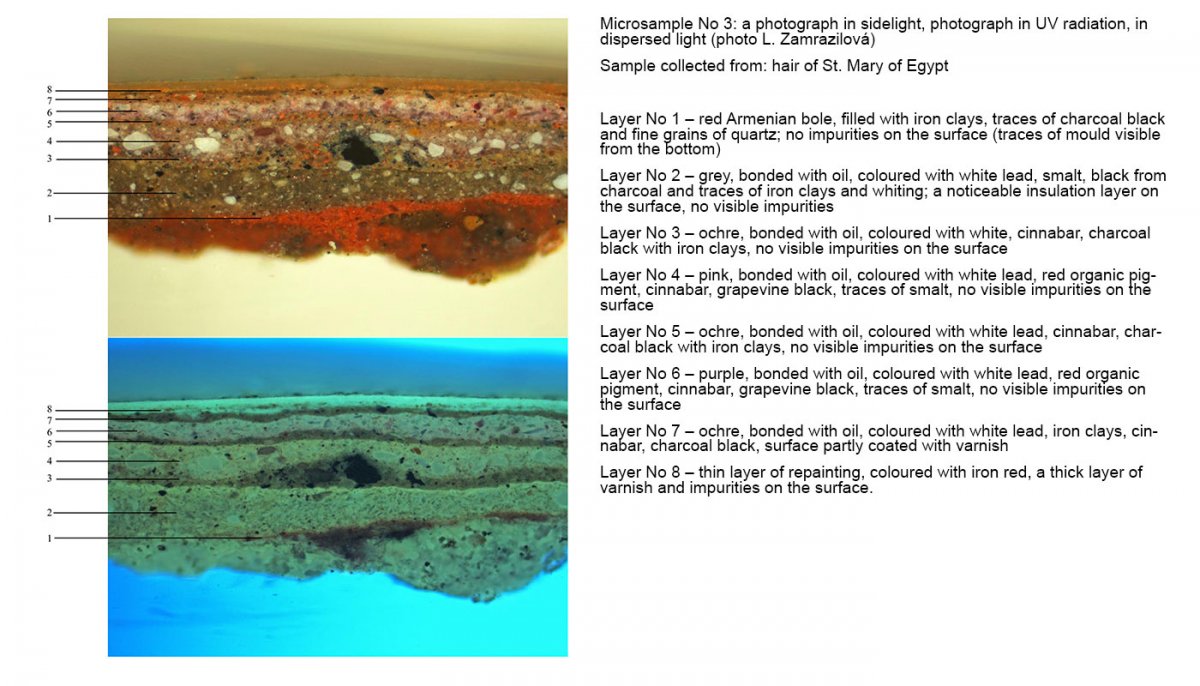 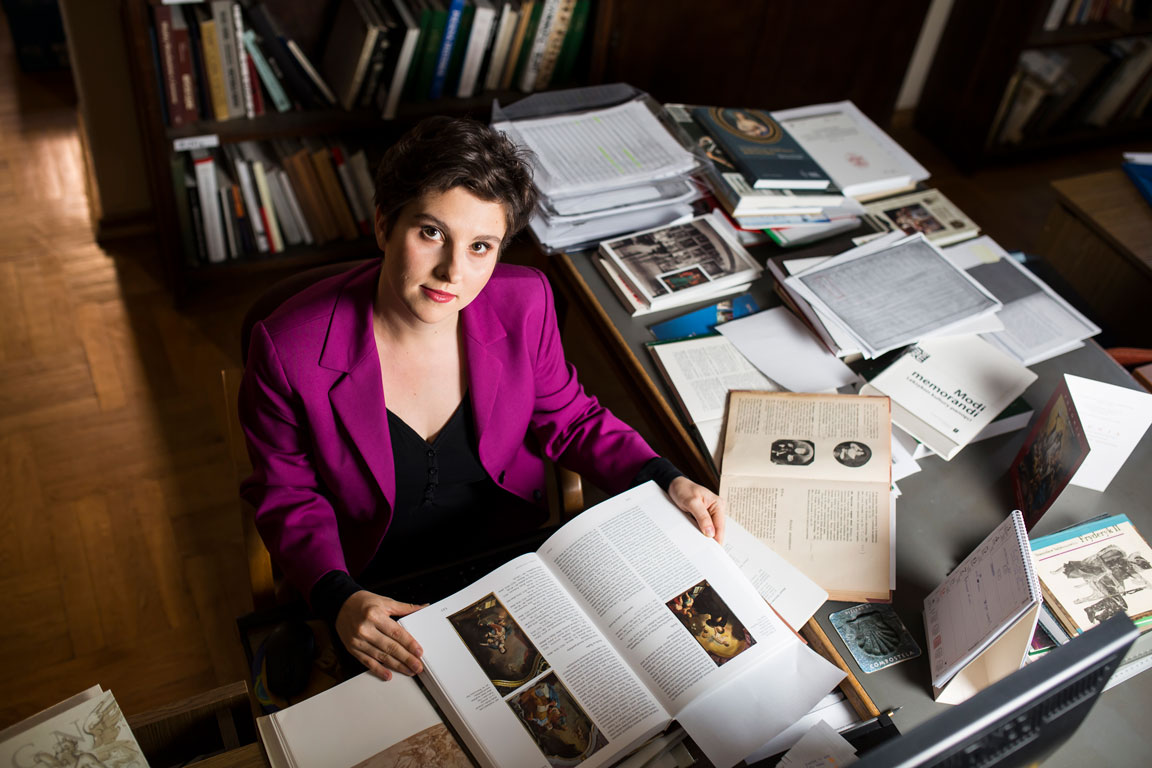 The photo was taken at the Art Department of the Lubomirski Princes Museum of the Ossolineum in Wrocław. Photo by Michał Łepecki

Graduated in art history from the University of Wrocław. In 2017, she defended a PhD dissertation entitled "Johann Christoph Liska – Life and Oeuvre (c. 1650–1712)". Since 2018, she has worked at the Art Department of the Lubomirski Princes Museum at the Ossolineum. She has worked on numerous research projects, e.g. "Wirtualne Muzeum Barokowych Fresków" (2013), whose effects may be admired at www.wirtualnefreski.pl, and "Malarstwo Barokowe na Śląsku" (2012–2016), as well as an international digital humanities project entitled "Monuments and Artworks in East Central Europe Research Infrastructure", coordinated by the Herder Institute in Marburg (2016–2017). She has published in Polish and foreign journals ("Biuletyn Historii Sztuki", "Umění" "Journal of Art Historiography"). Her MA thesis on the Baroque painter Jeremias Joseph Knechtel was published as a catalogue for an exhibition organized at Muzeum Miedzi in Legnica.