A surprising amount of the information we have comes not from our own experience but from our observation of other people. This is possible because their emotions and behaviours serve as a source of valuable clues about the environment. Let us picture a typical household situation: baking a cake. We do not need to have the experience of burning our own fingers on a baking sheet of deliciously smelling sweet rolls to put on gloves when we take them out of the oven. It is usually enough to see a grimace of pain on the face of someone who was not as careful. The ability to learn through observation is widespread in the animal kingdom. We can observe it in our close and distant relatives, the apes, but also in rodents, mice and rats. 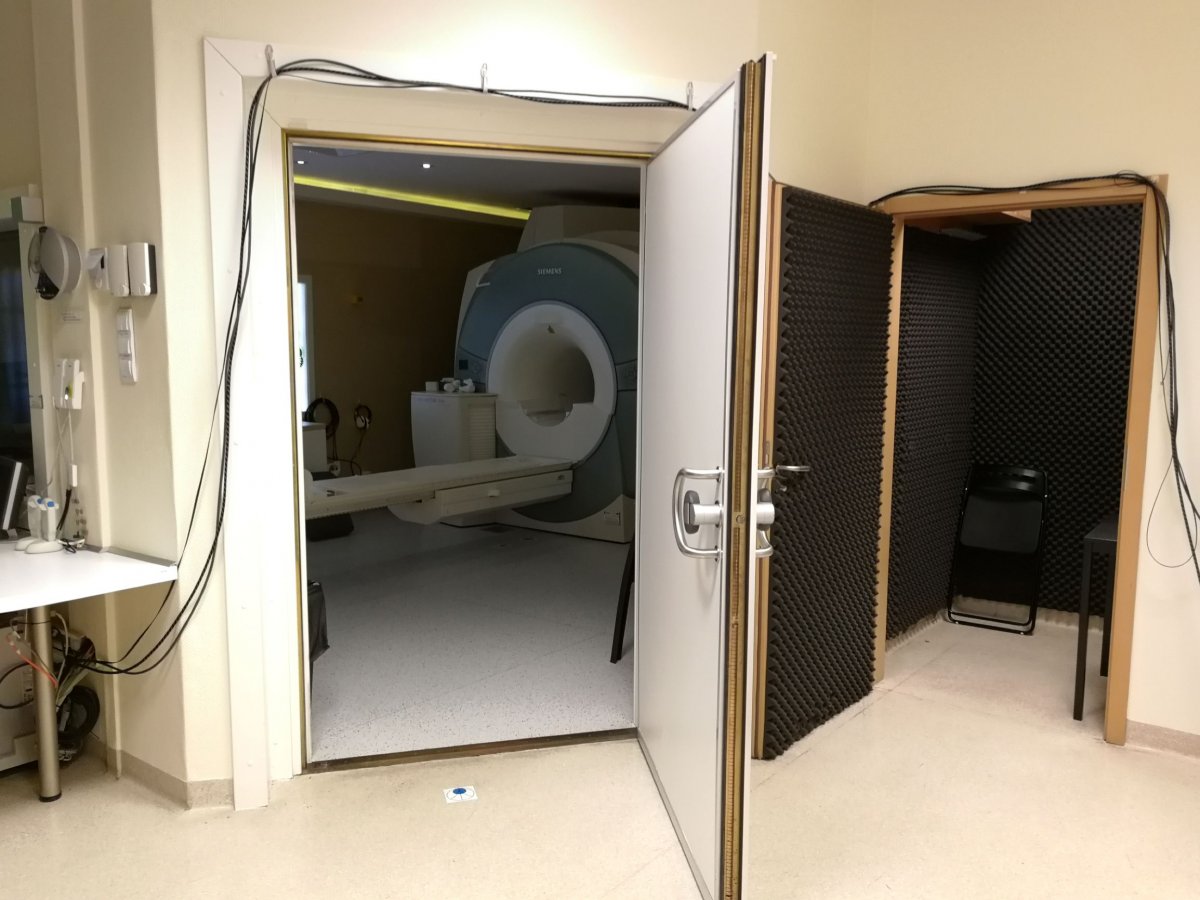 During the experiment, the subject was placed in an fMRI scanner and watched a video broadcast of a partner in an adjacent room. The study was carried out in the Laboratory of Brain Imaging of the Nencki Institute. Photo by Michał Szczepanik.

Our research project aims to investigate the mechanisms of human observational learning with the use of observational fear conditioning. In the process, one person is asked to watch another undergo the classical procedure of fear conditioning, during which subjects learn to associate a given stimulus (e.g. a blue square on the computer screen) with an aversive event (in our study, a weak but unpleasant electric shock to the forearm). After a certain time, the sight of the initially neutral blue square elicits unpleasant sensations even when it is no longer accompanied by an electric shock. We are interested not so much in the process of direct learning about the meaning of the blue square from one‘s own experience, as from the observation of another person who undergoes fear conditioning, i.e. a process based only on social stimuli, such as facial expressions. Research into observational fear conditioning has previously been carried out by Professor Andreas Olsson from the Karolinska Institutet with the use of actors and video recordings. In cooperation with Professor Olsson, we decided to conduct experiments with the use of live broadcasts and the participation of two people who knew each other. This allowed the observation to be more natural and to manipulate the degree of familiarity between the subjects.

Our experiments showed that socially transmitted fear can cause a clear physiological response in observers. Interestingly, even though watching the discomfort of another person elicited strong reactions, not all subjects learned to associate it with the conditioned stimulus. This suggests that observational conditioning rests on two independent mechanisms: the perception of the emotion experienced by another person and its conscious association with the co-occurring stimulus. The next experiment used the design which we developed to test brain activation patterns during observational fear conditioning. 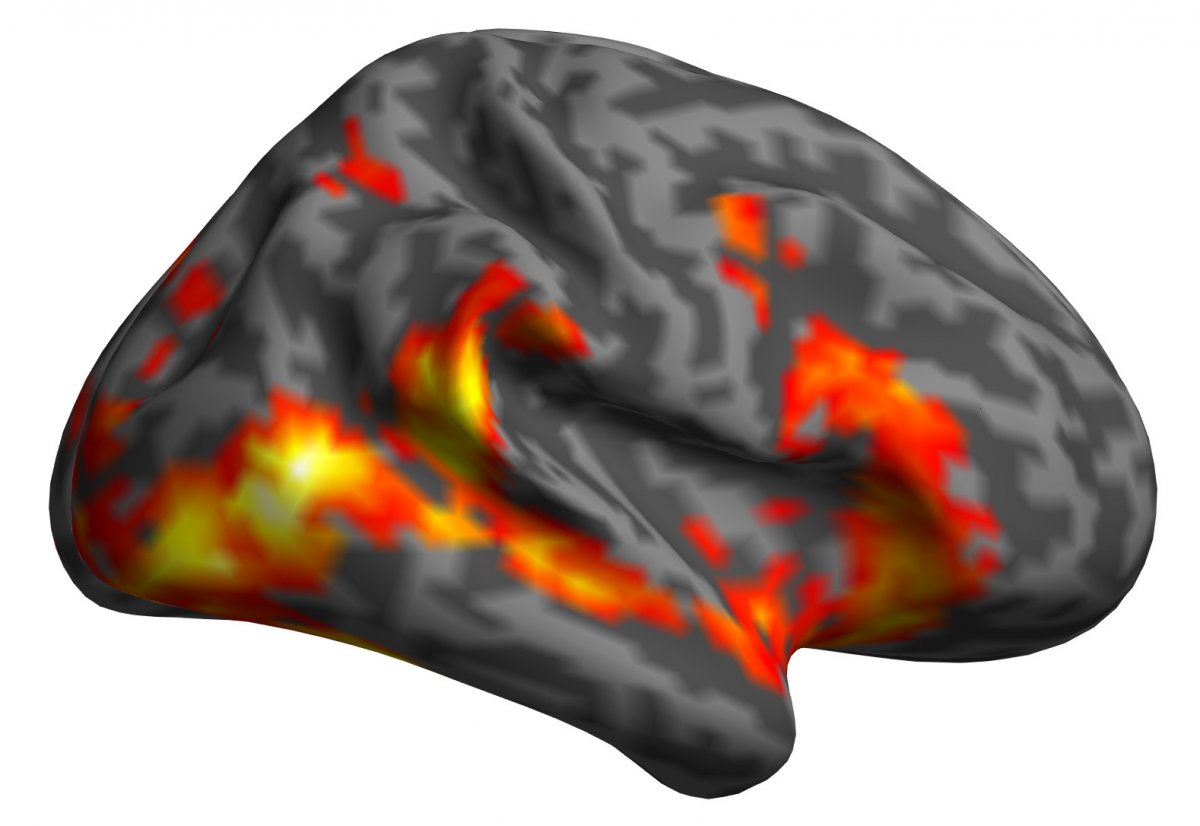 Watching a person experience an aversive stimulus causes a spike in the activity of many brain regions associated with the perception of movement and emotion (including the visual cortex, the superior temporal sulcus, the insula) in the observer.

We used fMRI to study both the patterns of brain activation observed when a subject watched another person and those seen when the stimuli which previously signalled danger were presented again, in isolation. The brain regions of key importance for direct fear conditioning were also shown to be activated by socially transmitted fear. In particular, we observed enhanced activity in the amygdala, the anterior insula and the anterior cingulate cortex. We also looked at brain activation patterns to see if they depend on whether the subject witnesses a friend or a stranger who experiences fear. Interestingly, no substantial differences in brain activation were observed in this case, which suggests that what observation does, above all, is provide information: what matters is the knowledge of danger and not its source. Importantly, a similar brain activation pattern due to socially transmitted fear and its independence from the degree of familiarity were also observed in rodents, which suggests the evolutionary continuity of the phenomenon. 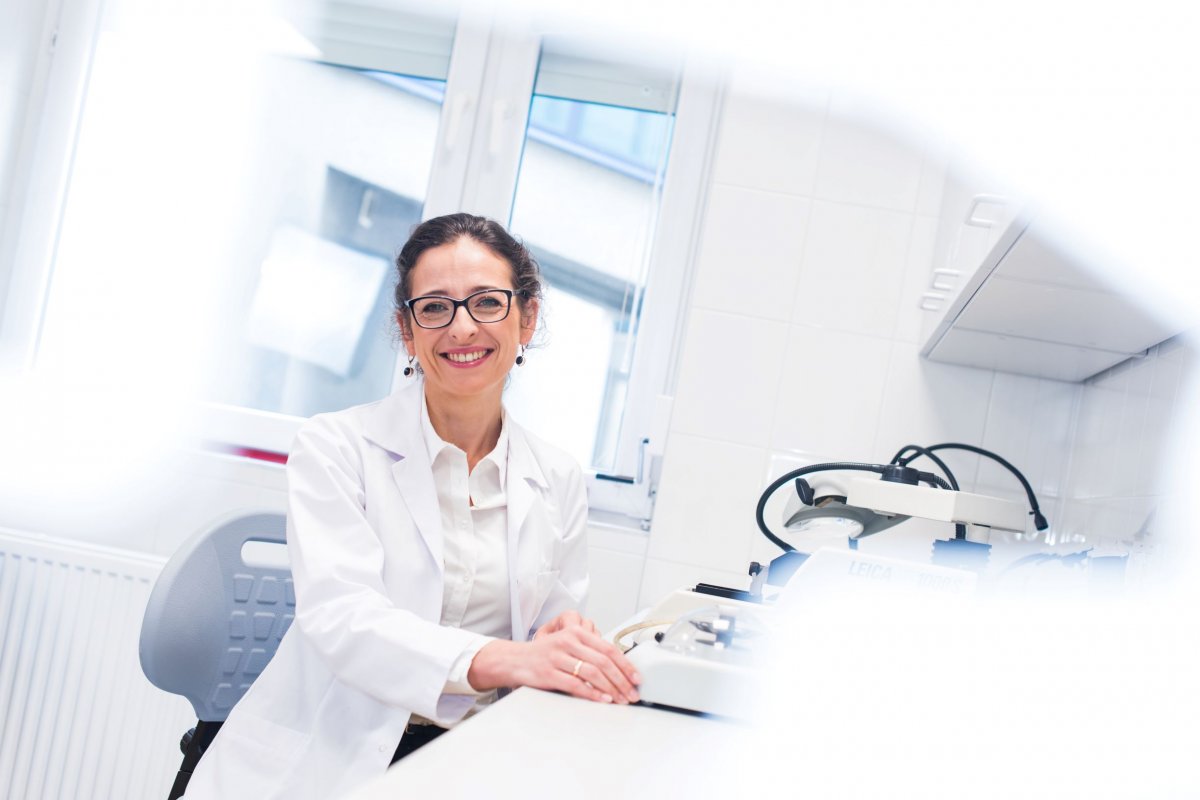 Photo by One HD.

Ewelina Knapska graduated in biology and psychology from the University of Warsaw and went on to earn a PhD degree in neurobiology at the Nencki Institute of Experimental Biology of the Polish Academy of Sciences (PAS). Following her PhD defence, she completed a two-year research fellowship at the University of Michigan, USA, and in 2013, she earned her habilitation. She has served as the head of the Laboratory of Emotions Neurobiology at the Nencki Institute, and won scholarships awarded by the Foundation for Polish Science, the Minister of Education and Higher Education, and Academia Europea. In 2016, she also won a prestigious grant from the European Research Council. Since 2018, she has co-managed BrainCity – Center of Excellence for Neural Plasticity and Brain Disorders (International Research Agenda funded by the Foundation for Polish Science). Already as a PhD student, Knapska discovered the process of emotional contagion between cohabiting rats and studied differences between the early response genes in different parts of the amygdala, the part of the brain responsible for emotional reactions. Today, she continues her research on emotional contagion and the brain mechanisms behind it, combining the advanced techniques of molecular biology and the behavioural monitoring of animals. Together with her co-workers, she has also developed a fear contagion model that allows them to study its underlying brain mechanisms in human subjects. Their better understanding will allow the creation of effective, personalized treatments for psychological disorders caused by social communication deficits, such as autism.