The role of the horses in medieval Poland

The role of the horses in medieval Poland

The purpose of this project is to examine the history of the horse in the early history of Poland. Among domestic animals this species undoubtedly belongs with those that have had an important influence on the history of man and his culture. Thanks to this species man could cover long distances faster and more easily, could develop transportation and revolutionize warfare and hunting. The significance of this species in the history of Poland, especially in its early period of the Piasts, is, however, quite poorly known due to very few historical records. From these we can gather that before the acceptance of Christianity, horses of particular appearance were believed to be associated with a god. Because of that, they were kept in sacred groves, and only priests had access to them; using them as prophetic palfreys that could tell the fortune of Slavs. Horses also served sovereigns, for example, the founder of the State, Mieszko I, who was wealthy enough to equip his military units with military horses. 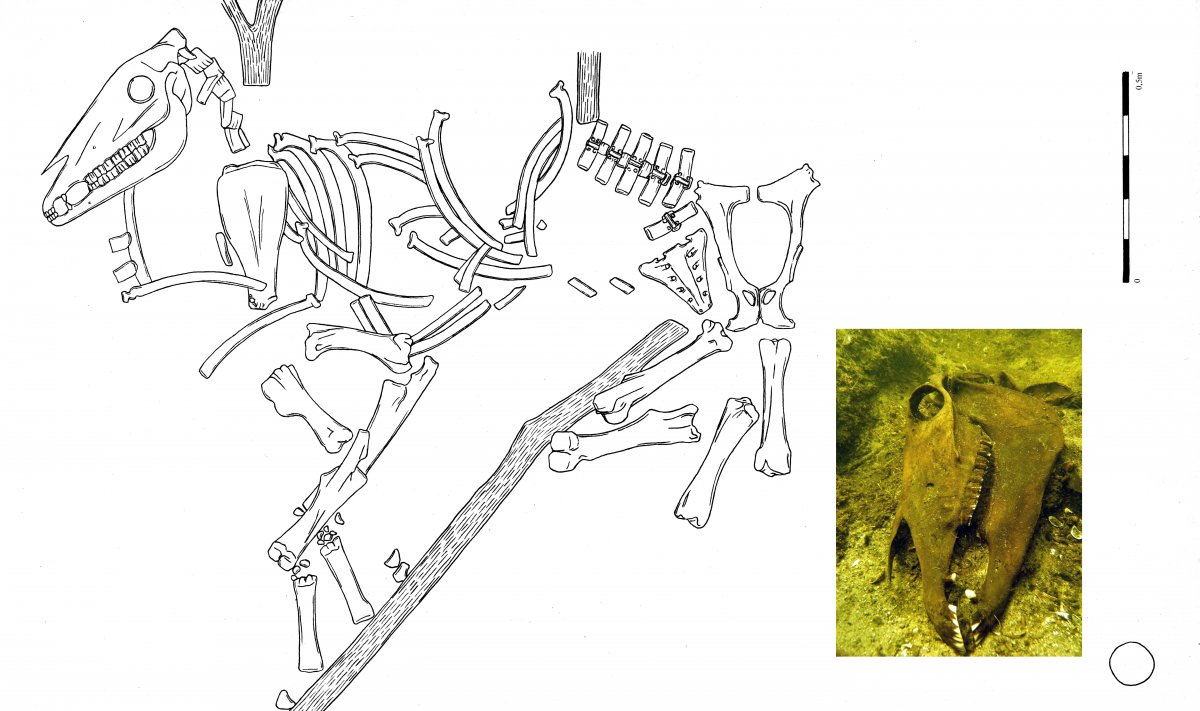 Horse's skeleton and the skull in the Zarańsko lake
(drawing by B. Kowalewska, photo by P. Białowicz)

Despite such a special significance, horse bone remains discovered in settlements among kitchen waste, have led us to think that the meat of this species was an edible product. Perhaps it belonged to hunted ones, since herds of wild horses, according to historical accounts, lived in the forests of Pomerania. Next to the randomly scattered bones, archaeologists are more and more often discovering horse skeletons or skulls accompanied by agricultural implements and other animal skulls. Due to such discoveries, we can suppose that after death parts of animals were buried in special tombs, as was practiced until recently in some parts of Slavic lands. Some specimens were probably important in rituals related to gratitude for successful yields.

Because there are definitely more archaeological horse finds than there are historical records of them, this project aims to gather all the archaeological bone discoveries of this animal, examine them in scientific laboratories and analyse the results obtained. The research material will include horse bone remains from castles, settlements, ritual sites and horse graves that have been discovered at about 130 sites, including the oldest seats of the Piasts – Gniezno, Poznań, and Ostrów Lednicki.

The subject of the research will then concern the appearance of this animal, its size and shape. For this purpose, researchers will conduct thousands of measurements of bones, skulls and teeth, and will use innovative genetic and isotopic analyses. Thanks to the genetic analyses it will be possible to get to know the differentiation of horses’ coats, as well as to answer the question if mules and donkeys were used. Isotopic analysis will serve to track the places of stay of palfreys and their owners. Analyses will be conducted to indicate which horses (of what size of body and sex) were used for what kind of purposes, and if Slavs were really hunting wild herds.

Rituals and customs in which the horse was used as a magical animal will be described. In this regard, horse skeletons and skulls discovered on islands on lakes and in surrounding waters will have particular meaning. While analysing in detail the development of sets of teeth, we will check how long the animals were kept alive, and if mares and stallions were used to the same extent.

The participation of horses in battles, hunting and everyday usage exposed them to injuries and illnesses, giving rise to infections visible in the bones and in the abnormal development of teeth. In this regard, detailed causes will be known via paleopathological analyses conducted in veterinary laboratories. Besides the examination of bones, we will also gather information about the treatment of the horse, its utilitarian and magical meaning contained in medieval records and chronicles, as well as preserved in the folk culture of Slavs.

The intended aims of the project will be realized by a team consisting of archaeozoologists, archaeologists, geneticists, specialists in isotopic analyses and veterinarians and zootechnologists. The effect of their work will consist of scientific articles, conference papers presented at national and international conferences and, first of all, a book presenting the history of this animal in the earliest stage of our statehood. Successive stages of the project will be regularly reported on the internet website designed especially for this purpose. 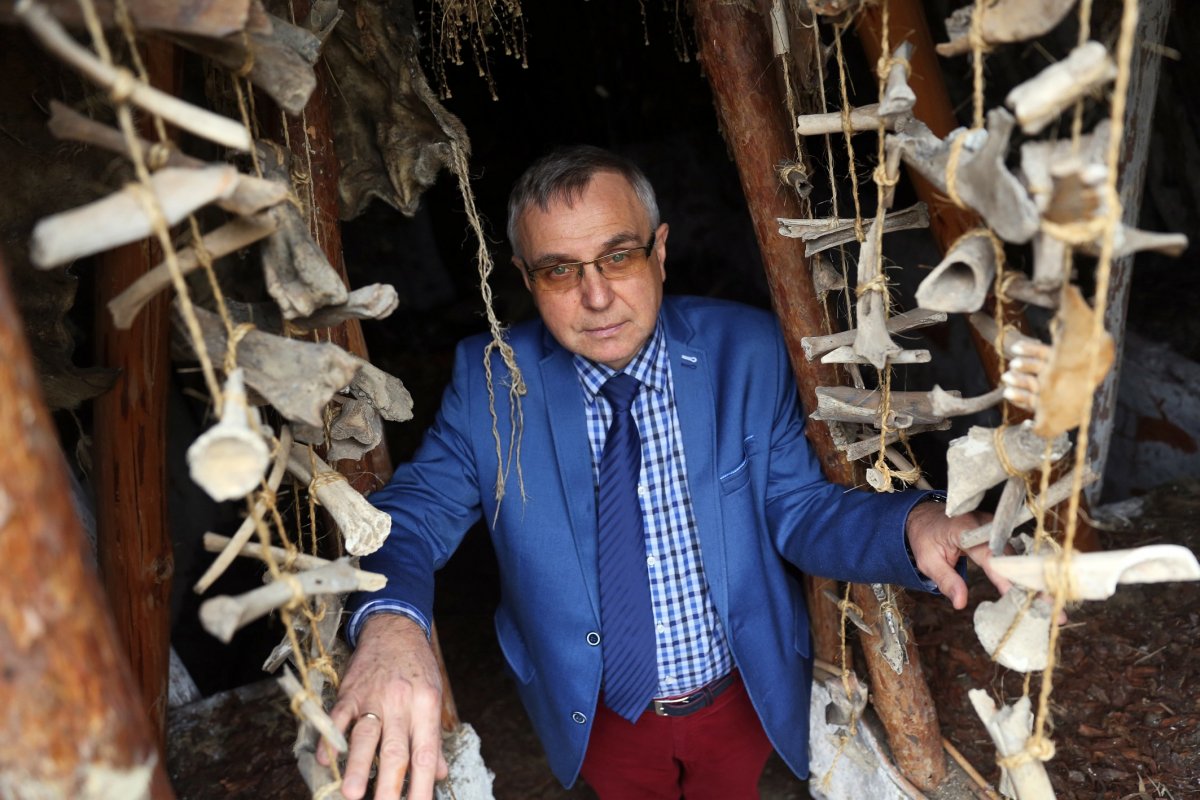 Principal investigator of the project (photo by A. Romański)

Archaeologist and zootechnician. Since 2006 Associate Professor at Nicolaus Copernicus University in Toruń. Head of the Natural Environment Reconstruction Laboratory in the Institute of Archaeology. He started conducting research on the history of animals and their importance in culture at the Faculty of Animal Anatomy at Poznań University of Life Science (1982-95), he continued as a PhD student, lecturer and docent at the Institute of Archaeology and Ethnology PAS (1995-2006). He was granted several scholarships in foreign institutions and research establishments, e.g. Alexander von Humboldt-Stiftung. Research associate at the Department of Archaeology, University of Reading (2011-2014) in the project The Ecology of Crusading. He specialises in zooarchaeology of mammals, birds and fish, mainly in the territory of Poland. He has also conducted research in Bulgaria, Ukraine, Egypt and Sudan. Author of over 260 papers, 4 books, editor of several collective works. Member of the Pre- and Protohistoric Sciences Committee of the Polish Academy of Science. He represents Poland on the Management Committee of the Oceans Past Platform in the European Cooperation Programme for Scientific and Technical Research. He has taken part in over 160 conferences, and has been main organiser and co-organiser of more than ten international and national conferences. Repeatedly distinguished individually and as a member of research teams by the rector of Nicolaus Copernicus University in Toruń for achievements in the area of science and research and organisation.