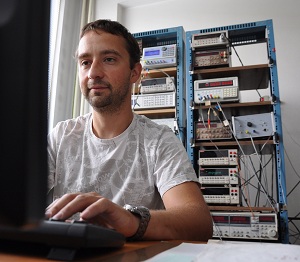 The phenomenon called superconductivity was discovered in 1911 by Heike Kamerling Onnes and his colleagues when they cooled mercury down to the temperature of liquid helium and noticed that the electrical resistivity of the sample dropped to an immeasurable value. This happened over a century ago and yet the behaviour of superconductors still remains impenetrable in many respects. As a matter of fact, we understand the properties of “classical superconductors” relatively well, but those of the new family of copper-oxide superconductors discovered in 1986 remain somewhat beyond our grasp, irrespective of the enormity of work devoted to studying these compounds. The mechanism which causes superconductivity in iron-based superconductors, which has been studied since 2006, also remains unexplained. These materials have drawn a lot of attention, despite the temperature of transition to the superconducting state being not particularly high. However, a weak dependence of the physical properties on crystallographic directions (low anisotropy) accompanied by an ability to carry high currents and the robustness of the superconductivity to a high magnetic field, give some hope for its practical implementation. Moreover, iron based superconductors, thanks to their relation to other unconventional superconductors, may serve as a convenient comparative material that can allow one to reach more general conclusions. One of the common characteristics of unconventional superconductors seems to be an occurrence of the region in the phase-diagram where an incomplete energy gap (called pseudogap, PG) appears in the electronic structure. The properties of the pseudogap are not well recognised and the relation between PG and superconductivity as yet remains unclear. 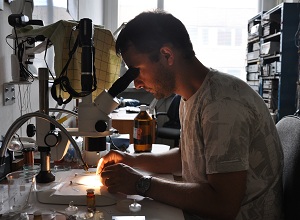 The objective of the project is to verify the presence of the PG state on diagrams of various iron-based superconductors, as well as to determine the properties of this exotic phase. Studies are focused on the transport properties, since it is known that the appearance of the pseudogap has a significant influence on the Wiedemann-Franz law which relates the electrical and thermal conductivity of a given material. We are going to study systematically the electrical resistivity, thermal conductivity as well as Hall and Righi-Leduc (called thermal Hall) effects in a series of doped iron-based superconductors, where part of the “original” atoms will be replaced with elements that change properties of the material. Single crystals will be grown in the Institute of Low Temperature and Structure Research in Wrocław and in the Paul Scherrer Institute in Villigen, Switzerland.

The analysis of the results should allow one to verify the existing theories of unconventional superconductivity and could be a step towards developing a proper model of the superconducting state. Having such a model would be invaluable for basic research as well as applications.

physicist employed at the Institute of Low Temperature and Structure Research, Polish Academy of Sciences, in Wrocław, Poland. He spent one year working at the University of Florida in Gainesville, FL, USA and two years at the University of Cambridge, UK. He is studying the properties of unconventional superconductors and other materials whose electronic systems are strongly correlated. His area of interest is electrical and heat transport phenomena occurring in a magnetic field.