Iconicity in the grammar and lexicon of Polish Sign Language

Iconicity in the grammar and lexicon of Polish Sign Language 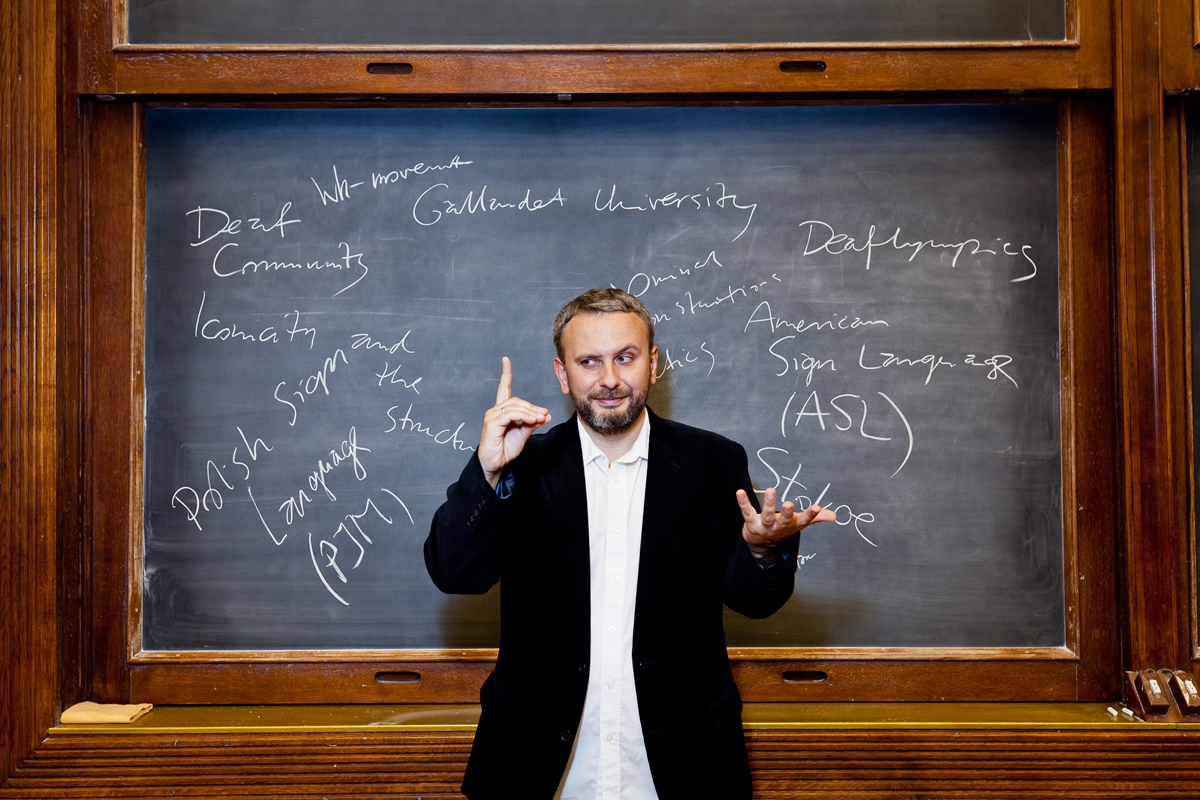 The study of sign languages is an important and dynamically developing branch of contemporary linguistics. It is a shared view among academics worldwide that languages used by the Deaf form an interesting object of study, since despite their systemic completeness and complexity they are surprisingly different from phonic languages. The capitalization of the word Deaf suggests that this word denotes a member of a linguistic minority for whom signing is the basic communication tool and a crucial identity-forming factor (unlike in the case of a person who has lost their hearing ability, as did, for instance, Beethoven).

The Section for Sign Linguistics (PLN, Faculty of Polish Studies, University of Warsaw), established in 2010, is the first Polish unit specializing in studies on the communication of the Deaf. Its aim is to develop — based on a vast corpus of records — a comprehensive description of Polish sign language, or PJM, in terms of grammar and lexicon. Importantly, the Deaf use about 200 languages worldwide, but each of them is different in terms of lexicon and grammar from both the phonic language of a specific country and from other sign languages. Due to a lack of appropriate proper names, researchers and users themselves refer to sign languages using abbreviations based on local phonic languages, e.g. NZSL (New Zealand Sign Language), TİD (Türk İşaret Dili — Turkish Sign Language) or LSC (llengua de signes catalana — Catalan Sign Language).

The purpose of the “Iconicity in the grammar and lexicon of Polish Sign Language” project financed by the National Science Centre was to carry out a multi-dimensional study on the grammar and lexicon of PJM, taking into special account the issue of iconicity of sign languages, understood as the relationship between the linguistic form (sign) and its denotation (meaning), widely discussed in literature. The scope of works included the extension and annotation of a vast visual corpus of utterances in PJM, which was used as an empirical basis for the first dictionary of that language prepared in compliance with modern lexicographical rules and standards. Therefore, the project led by Paweł Rutkowski, PhD, aimed at documenting a language which — despite a lack of interest among the non-hearing impaired majority — forms a part of Polish and European cultural and linguistic heritage. 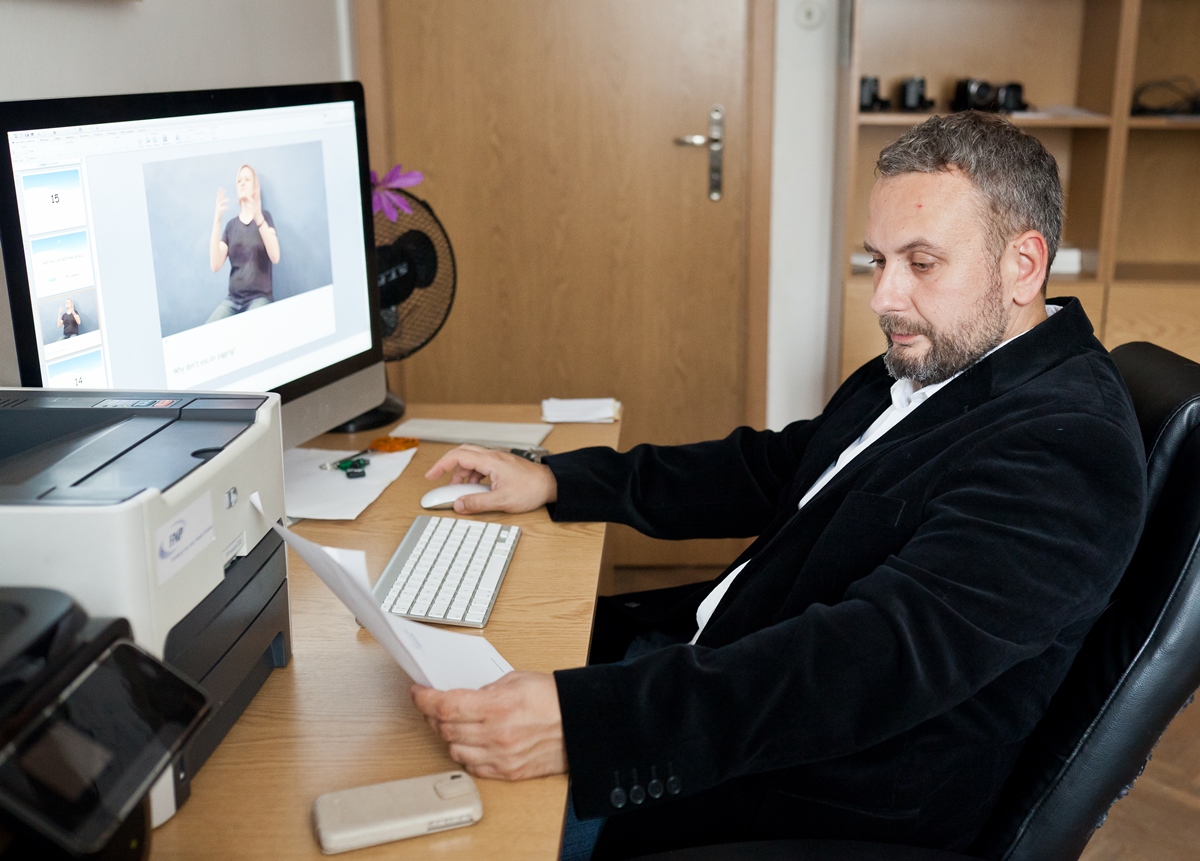 Since this project was carried out within the HARMONIA funding scheme, its important aspect involved international cooperation with key experts from the field of sign communication. Paweł Rutkowski, PhD, joined the Unraveling the grammars of European sign languages: pathways to full citizenship of deaf signers and to the protection of their linguistic heritage program, financed from 2011-2015 by the European Commission (IS1006 action in the COST programme), as a management board member. Its aim was to develop a common framework for the grammatical description of various sign languages used in Europe. One should mention that Paweł Rutkowski is the only scientist from Central and Eastern Europe among the researchers participating in the project.

Furthermore, the study on grammar financed by NCN served as a springboard for establishing interdisciplinary cooperation with the Laboratory of Brain Imaging at the Nenecki Institute of Experimental Biology. Within the Signing Brain project, Paweł Rutkowski attempted to transfer the linguistic discussion on the properties of the PJM syntax to the field of neurobiology. For this purpose, a neuroimaging study using functional magnetic resonance imaging (fMRI) was carried out. The examination has shown how specific signing structures are processed by the brains of deaf users of PJM, and its results have generated significant interest in the international scientific community.

One should emphasize that the results of research carried out by Paweł Rutkowski and his team and financed by NCN have found their practical application, which is important from the perspective of social needs. For two years PLM has been developing multimedial adaptations of textbooks for schoolchildren with special educational needs (including deaf and hearing-impaired children), as commissioned by the Ministry of Education. The adaptations have the form of computer software offering access to thousands of video files with translations of all texts included in the original textbook into the sign language. Such attempts to ensure that the Deaf have equal opportunites to communicate, the right to full participation in social life and appropriate educational opportunities would not have been possible without solid linguistic foundations. This is why the study of PJM grammar and lexicon is inextricably related to the issue of full linguistic rights of the Deaf minority. This issue is of particular importance in states such as Poland, where the full-fledged nature of sign communication has been questioned for decades. 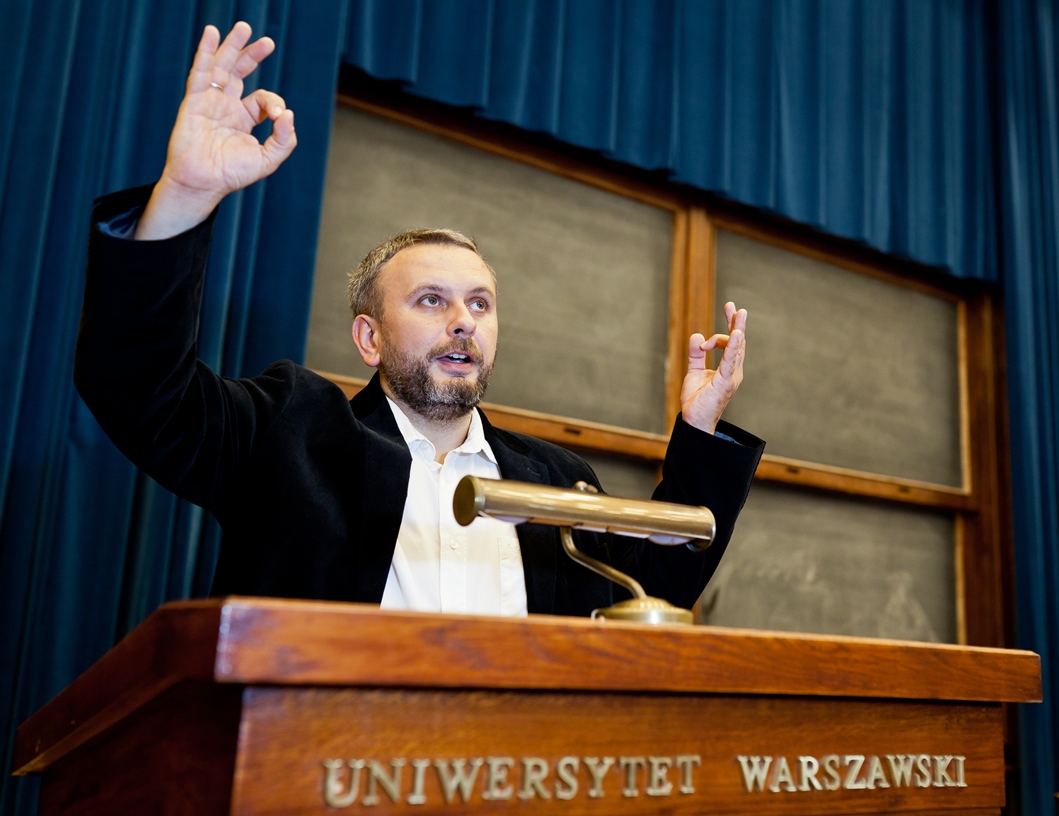 The creator and head of the Section for Sign Linguistics at the University of Warsaw, is a general linguist, a specialist in the field of syntax of natural languages, and researcher of the Polish sign language (PJM). He is the author of more than one hundred academic publications and textbooks, including several dozen papers published in international journals. An alumnus of the University of Warsaw and Adam Mickiewicz University in Poznań, he has been awarded a number of prizes, grants and scholarships by such institutions as the National Science Centre, Foundation for Polish Science, Ministry of Science and Higher Education, Fulbright Foundation, Kościuszko Foundation, DAAD, Polityka Magazine and the Stefan Batory Foundation. He has also been a student and research fellow in USA (Yale University, Wayne State University) and European academic centres (Oxford, Madrid, Potsdam), and a member of the management board of an international COST IS1006 action. Prof. Rutkowski is a member of the Polish Council for the Sign Language at the Ministry of Family, Labour and Social Policy.