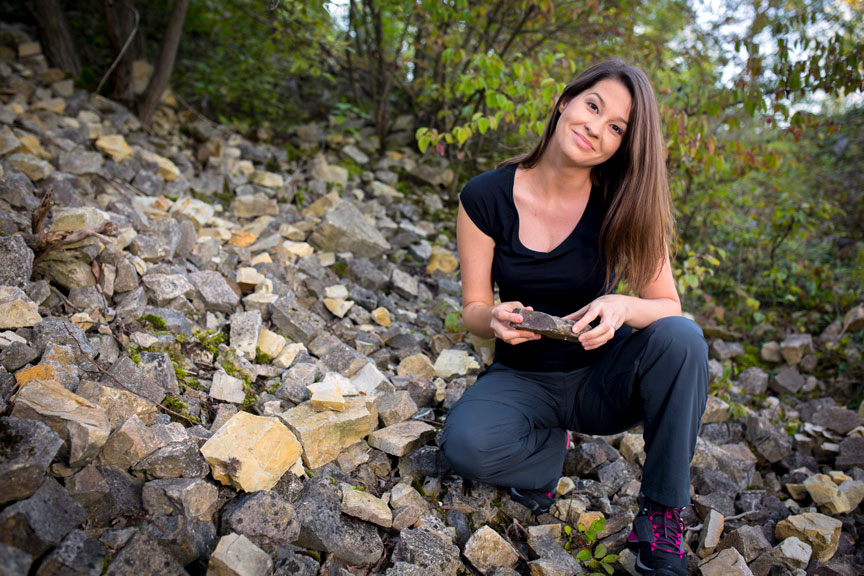 The main purpose of the project was to reconstruct the conditions of rocks sedimentation (deposition) in the Lower Silurian (433-430 million years ago) in order to determine the causes of what is known as the Ireviken extinction, during which mainly deep-sea organisms, such as graptolites, conodonts, and trilobites became extinct. The causes are still widely debated in the scientific community. Funded within the framework of PRELUDIUM 7, the research project aimed to reconstruct the water column oxygenation levels that obtained before, during and after the Ireviken event. Its innovative character resided in the application of state-of-the-art methods of organic and inorganic geochemistry, such as gas chromatography coupled with mass spectrometry (GC-MS), total organic carbon concentration (TOC%) and measurements of microscopic framboidal pyrite diameters and trace elements content.

The results obtained with the above methods served as a basis for developing a conceptual model of the sedimentation environment before, during and after the Ireviken extinction (Fig. 1). The period leading up to the event was characterized by an absence of framboidal pyrites, low concentrations of trace elements (such as molybdenum) and low TOC%, which suggests stable oxygen conditions in the water column (Fig.1A). In contrast, fluctuations in the diameter of framboidal pyrites, trace elements concentrations and TOC% pointed to rapid changes in oxygenation and strong chemistry gradients in the water column (chemoclines) during the Ireviken event. These changes were likely to contribute to the extinction of Silurian organisms (Fig.1B). In the aftermath of the event, large quantities of small framboidal pyrites typical of anoxic environments appeared and TOC% increased; trace elements concentrations were not significantly elevated, which suggests that the seabed was occasionally ventilated, probably in connection with upwellings (sea currents that push cold deep sea water toward the ocean surface) (Fig.1C).

A detailed geochemical analysis of the sedimentation conditions of the Ireviken event allowed us to confirm its similarity to the earlier great Ordovician-Silurian extinction. Based on the identification of biomarkers characteristic for green sulphur bacteria, the project was also able to document the presence of an anoxic photic zone (layer of the water column that is accessible to sunlight) in the Lowest Silurian. This discovery helped to connect the Ireviken extinction to other biotic crises of the Phanerozoic (Ordovician, Devonian, Permian and Triassic). The project findings shed new light on the structure of the water column and the possible causes and consequences not only of the Ireviken event, but also the Ordovician-Silurian extinction. The aims of the project were accomplished and its results were published in prestigious JCR-listed journals and presented at international academic conferences. 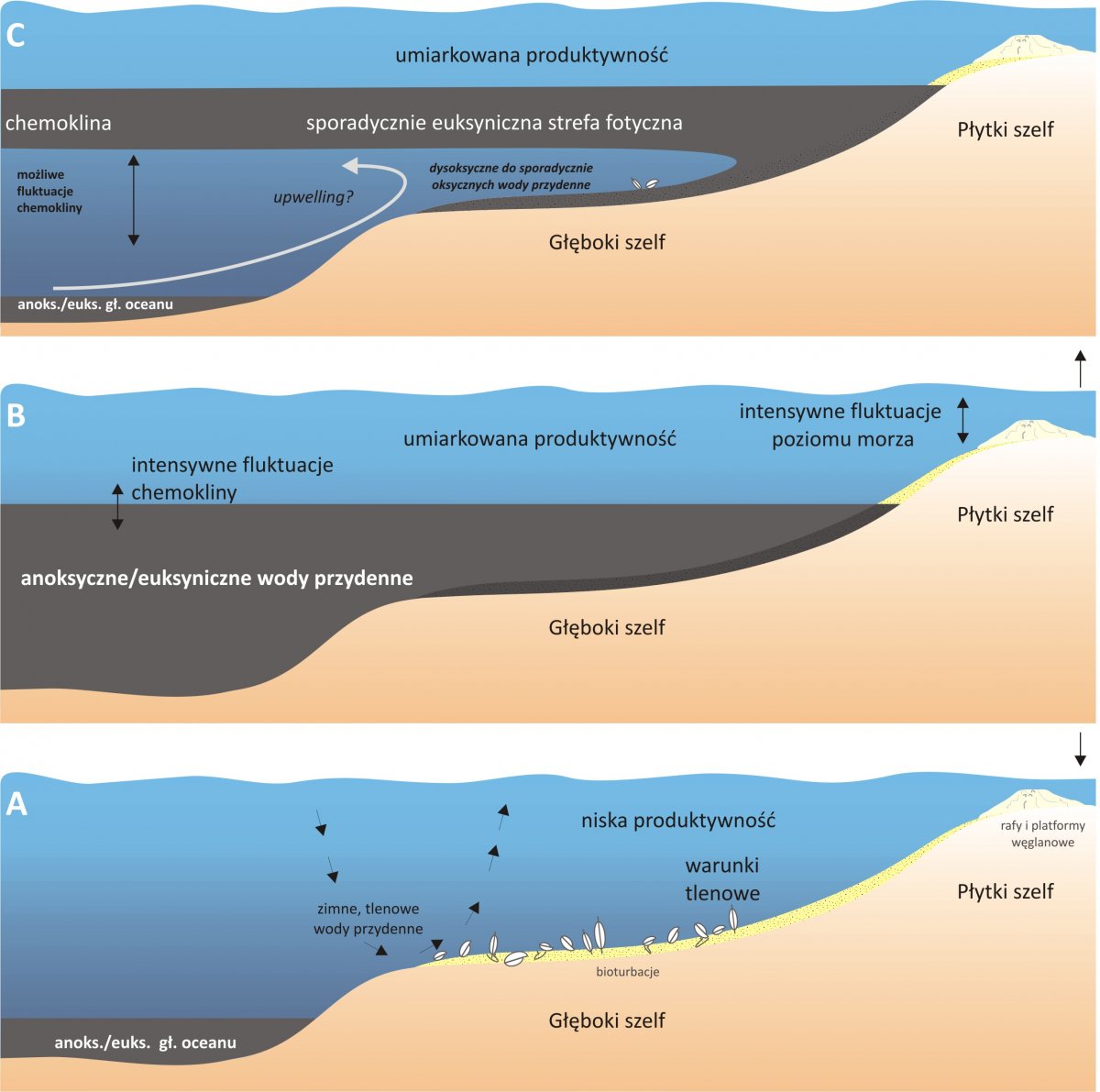 Three models of sedimentation conditions before – A, during – B and after – C the Ireviken event 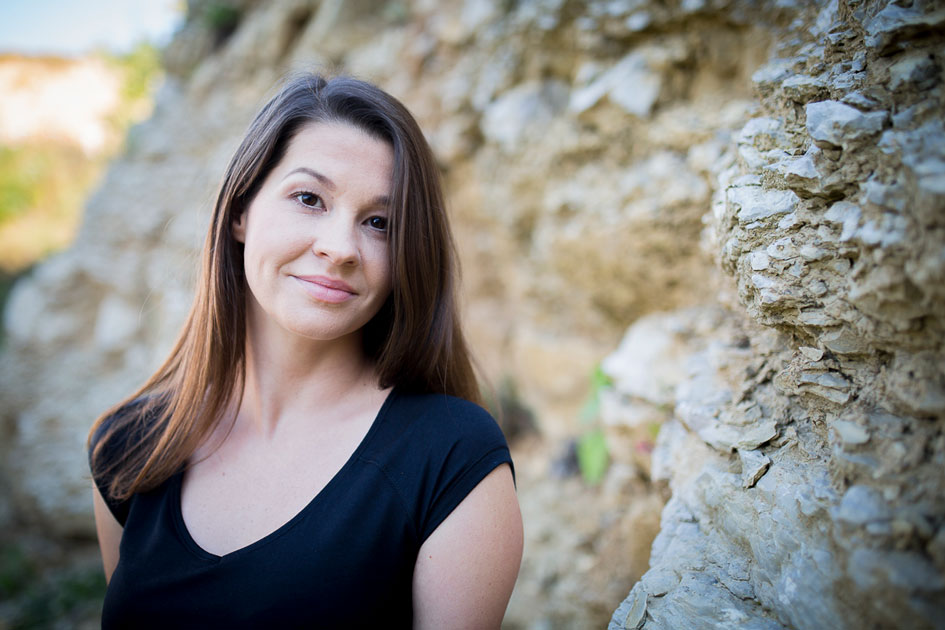 Having graduated in geology from the Faculty of Earth Science of the University of Silesia in Katowice, she earned her PhD in 2017. She has authored numerous publications in journals such as Global and Planetary Changes, Organic Geochemistry and Geological Magazine. She won first prize in a competition for the best doctoral dissertation in mineralogical sciences organized by the Mineralogical Society of Poland (2017) and the scholarship for the best PhD student at the Faculty of Earth Sciences of the University of Silesia. Her research interests include organic geochemistry, sedimentology and paleoenvironmental reconstruction.