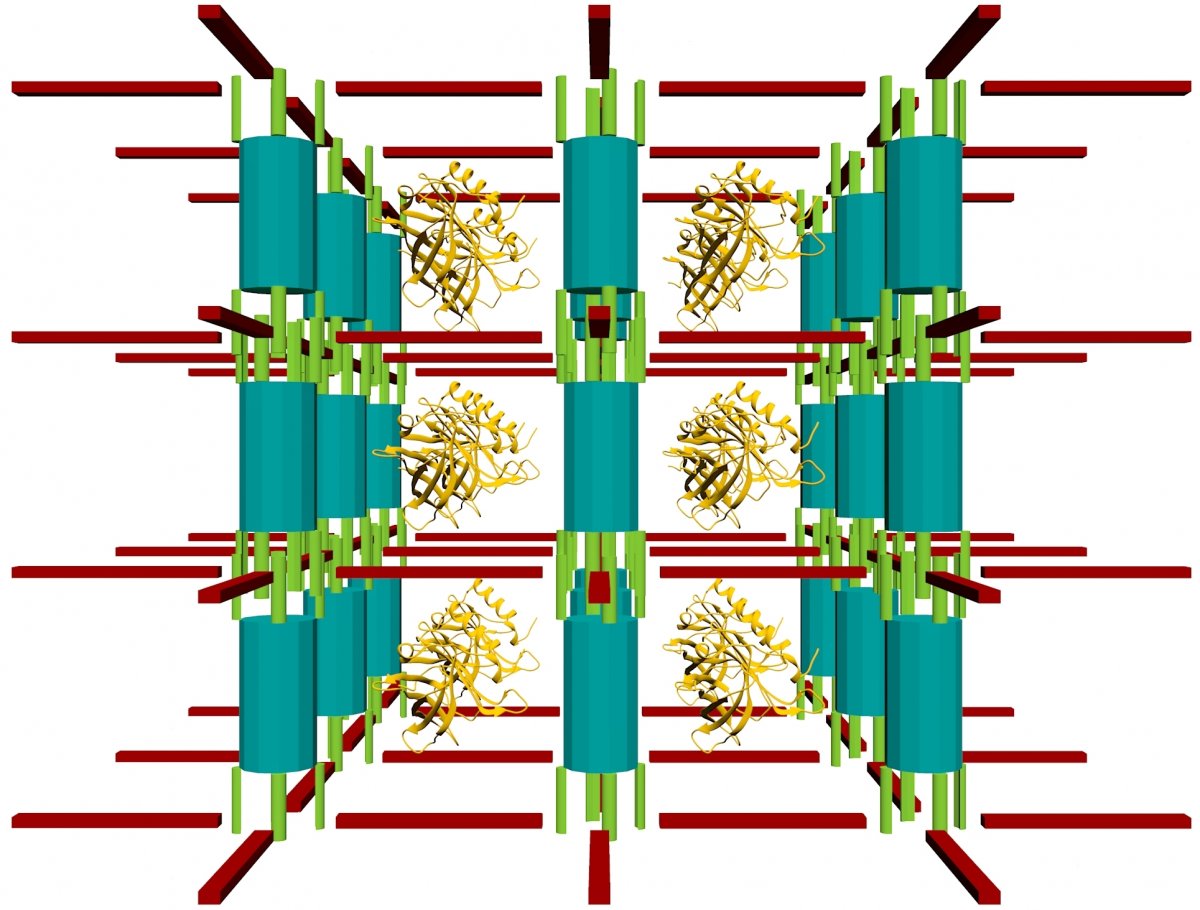 The conception of creation and use of supramolecular
peptide-organic frameworks

In the past, new medicines were discovered by serendipitous accidents or were created in a cost- and time-consuming trial-and-error way. Today, the drug design field is dominated by a rational, structure-based approach. Briefly, one must first define the molecular target (usually a protein) of the prospective therapy, and only then design the molecular silver bullet (drug molecule). The main source of structural information about biological macromolecules is protein crystallography. The determination of a crystal structure provides a clear three-dimensional picture, with each of the numerous atoms, sometimes in their hundreds of thousands, forming the biological molecule under study placed precisely in 3D space. In the crystallographic experiment, a crystal is exposed to X-rays, and the recorded diffraction pattern serves as the basis for deciphering the atomic structure. A major bottleneck is still the formation of high-quality single crystals. New approaches in this direction are still needed.

In our project, we will construct 3D supramolecular frameworks to be used as templates for protein crystallisation. The frameworks will be designed as self-assembling Lego blocks with three precisely defined shapes. One of those “shapes” will be peptidic in nature, i.e. it will have the same chemical character as the polypeptides of protein molecules. Since, besides peptides, our Lego blocks will be made of simple motifs known from organic chemistry, our 3D structures will be termed Peptide-Organic Frameworks, or POFs. Chemists and materials engineers (who design new materials from atoms and molecules) have created framework materials before, but the concept of POFs is entirely new. The potential of POFs could be enormous, simply because of their compatibility with the chemical character of proteins. We expect that POFs would provide an ideal environment for ordering (in their holes) - and ultimately for crystallisation  of protein molecules which are difficult to crystallise by traditional methods. The use of peptides will endow our POFs with other interesting properties, such as chemical diversity (a large Lego set), easy availability or biocompatibility. It would not surprise us if our POFs also found other applications as new materials in medicine or technology.

We are very well prepared for the construction of our POFs, which are already primed and ready on our drawing boards. Recently, we have designed and implemented an analogous methodology for the creation of molecular Peptidic-Organic Capsules, which we can successfully load with a desired chemical cargo. In the future, it could be a drug molecule to be delivered to its precise place of action. The transition from self-assembling POC capsules to open 3D POF frameworks should be chemically feasible. Besides, precedents are known to science. For instance, the well-known spherical micelles (lipid bilayers immersed in water) were successfully converted into LCP (Lipidic Cubic Phase) mesophases, which are now successfully used for the crystallisation of membrane proteins. In our project, we will implement a similar idea to the crystallisation of water-soluble globular proteins. 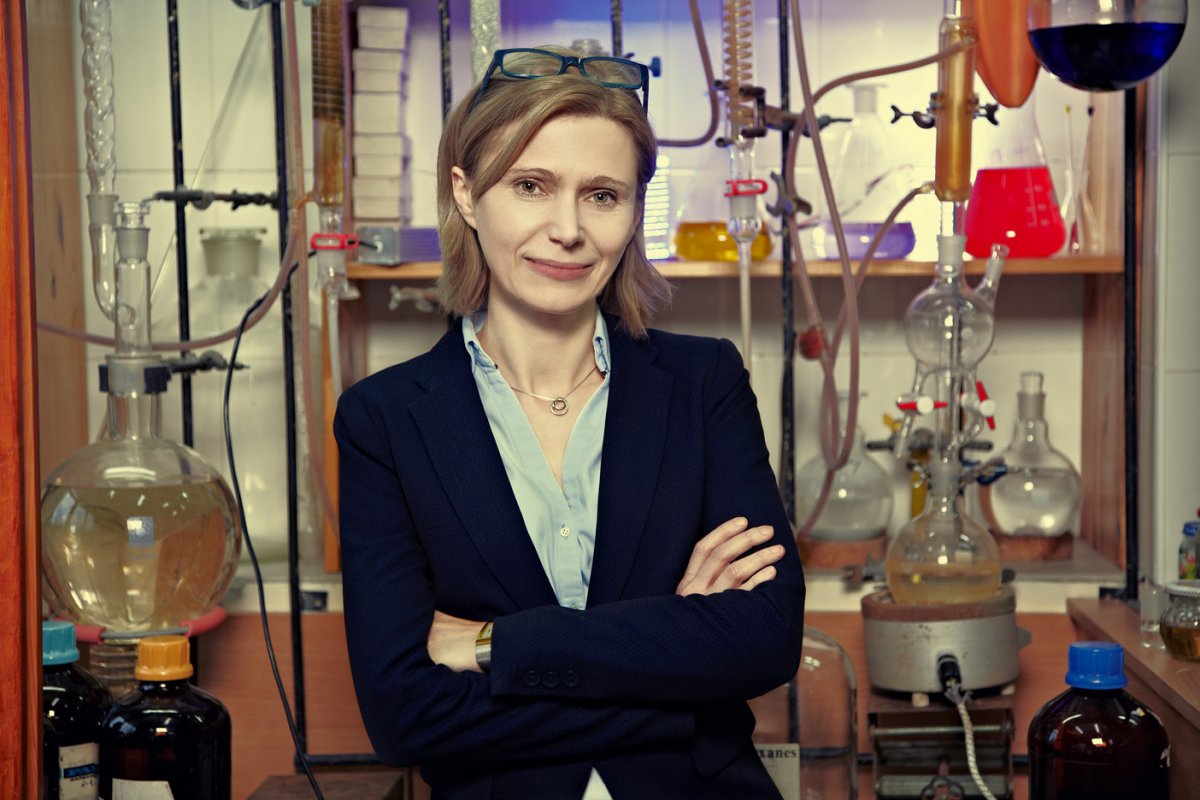 Agnieszka Szumna graduated from Chemistry Department of Warsaw University. Starting from 1996 he carried out research on supramolecular chemistry at the Institute of Organic Chemistry Polish Academy of Sciences. In 2001 she obtained a PhD degree with honors there. Then she moved to the University of Missouri, Columbia, USA for a postdoctoral stay. She worked under the supervision of prof. Jerry L. Atwood on molecular construction of ditopic anion receptors. After coming back to Poland she started an independent research on chiral recognition and synthesis of biomimetic molecular containers. Her habilitation (2010) was awarded with a Prime Minister Award and the Scientific Award of the 3rd Department of Polish Academy of Sciences (Nagroda Naukowa III Wydziału PAN im. Włodzimierza Kołosa). In the same year she obtained a BRIDGE grant from the Foundation for Polish Science that allowed her to open a new research group in the Institute after a leave. Her group currently gathers many young, motivated people (university and high school students) and the research founding is based on OPUS, PELUDIUM and DIAMOND grants. The main research in the group is focuses on design and synthesis of porous chiral materials and on their applications in material science and biology. She’s got an 11-years old son Filip and a 6-years old daughter Nina.